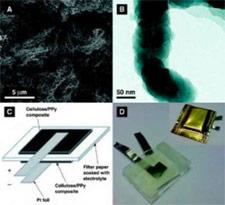 Somehow or another, we've figured out how to send mere mortals to the moon, create (and mass produce) a laptop thin enough to floss with and add multitouch capabilities to a mouse. But for whatever reason, we're still stuck using AA batteries that last approximately one-fifth as long as you need them to. Outside of a few breakthroughs here and there, the battery industry at large has found a holding pattern that digs at consumers and likely fattens the wallets of those in charge. Thanks to new research surrounding the use of Cladophora (green algae) in a flexible, ultrathin alternative, it looks as if we may finally be onto something good. Researchers purport that these super skinny cells could be placed in areas where batteries are currently unable to go -- think of perpetually charged wall sensors, energized clothing or even light-up wrapping paper. Better still, prototypes have shown the ability to hold a significant charge, but unfortunately for us all, no specific production date has been pegged. A boy can dream though, yeah?

In this article: algae, batteries, battery, biodegradable, cellulose, Cladophora, green, plant, plants
All products recommended by Engadget are selected by our editorial team, independent of our parent company. Some of our stories include affiliate links. If you buy something through one of these links, we may earn an affiliate commission.
Share
Tweet
Share