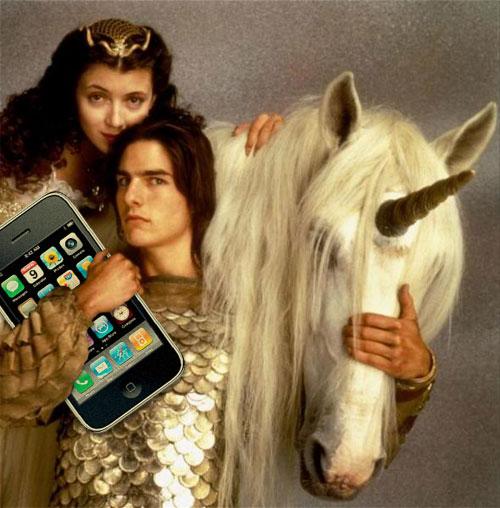 Harry McCracken has a great post on Technologizer reviewing the tremendous buzz around the iPhone right before it launched -- it was about three years ago at this time that rumors were swirling around Apple getting into the phone market. All sorts of predictions had been made for years, dating back to a 2002 New York Times piece in which John Markoff said "Mr. Jobs means to take Apple back to the land of the handhelds, but this time with a device that would combine elements of a cellphone and a Palm -like personal digital assistant." Of course, it took until 2007 for Apple to announce the iPhone and nearly six months longer for Apple to actually ship it.

The rumors of Apple doing a phone back then were at about the same fever pitch of the recent Apple tablet rumors. Like the iPhone, the tablet rumors aren't at all new -- in this case we can go back to 2003 for some of the earliest stories about this mythical device. Will Apple introduce a tablet in 2010, as some predict? Will there be in an introduction in January? What features might it have, and how could it be sold and positioned? I'm not going to speculate on those things for two reasons: first, if I don't know, my guess is as good as yours -- and second, if I do know, I probably couldn't tell you anything, could I? Having said that, I find it remarkable that the latest tablet buzz so closely echoes the run-up to the iPhone. Call it déjà vu all over again.

First, while many people were expecting a phone from Apple. and most folks had anticipated the iPhone name, almost all the rumored and predicted details of the phone were wrong. It's human nature: we tend to try and take the known and fit it into the unknown. That's why so many early iPhone mockups tended to look like an iPod nano with a dialer and perhaps some sort of Front Row UI to make it all work. Nothing could have been further than the truth. The tablet rumors of are similarly contradictory. Some say it's a seven-inch device, while others claim it's 10 inches. Some argue for two models. One version claims it's a traditional OS X device with a Tablet PC-like user experience; others swear it's nothing more than a 10-inch iPod touch. I'll wager that should Apple actually announce a tablet device, any and all of those things will be as correct as they are wrong -- and all at the same time.

Second, there's normally a huge amount of rumors this time of year due the proximity of Macworld Expo, where Apple traditionally introduced new products. But that's all over -- Apple pulled out of Macworld last year, and will not participate in this year's event. Even still, what's amazing is without a defined presence at Macworld, a keynote at CES, or even a date of any announcement Apple has once again already managed to overshadow all of CES with just the barest rumor of a new device in the wings.


Similarly, Apple's already garnered more mindshare about such a device than competitors who have both shipping and announced products, all without announcing anything at all. I'm not just talking the insular blogosphere, either -- in the last week alone the New York Times, The Financial Times, and the Wall Street Journal all have done stories on this mythic Apple device, all for the most part ignoring shipping or announced devices from Lenovo, Toshiba, JooJoo and Archos. One article even suggested that Microsoft has already ceded the market to Apple in terms of dominance.

I've talked in the past about the market for MIDs and other 'tweener devices and just how hard it is to bring those products to market successfully. Devices that fall between the phone and laptop have not historically done well -- not even remotely well. A larger iPod touch or a small MacBook with a touch screen is simply not the next big thing for Apple -- the goal is to appeal to 50 million customers, not 50 thousand. Perhaps that's why there's so much mystery: what we're waiting for isn't another failed 'tweener device but something as different from what came before as the iPhone was to previous mobile phones.

Perhaps Apple indeed has a different take on this space. Perhaps there is an iSlate, as the latest rumors call it, but perhaps like many other long-desired and never-seen Apple products over the years (remember the iWalk?) the iSlate may just be uWish.

Michael Gartenberg is vice president of strategy and analysis at Interpret, LLC. His weblog can be found at gartenblog.net. Contact him at gartenberg AT gmail DOT com. Views expressed here are his own.
In this article: apple, apple tablet, AppleTablet, column, columns, entelligence, featured, features, islate, rumor, rumors, tablet
All products recommended by Engadget are selected by our editorial team, independent of our parent company. Some of our stories include affiliate links. If you buy something through one of these links, we may earn an affiliate commission.
Share
Tweet
Share