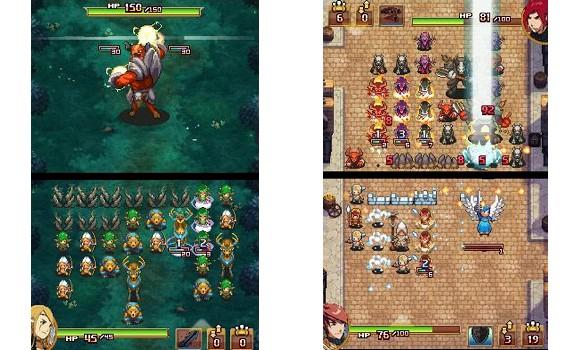 Might and Magic: Clash of Heroes
If I had my way ... well, a lot of things would be different. When it came to video games, I'd make sure that everyone -- whether they own a Nintendo DS or not -- had a chance to play Might and Magic: Clash of Heroes. Now, I know, Might and Magic? Isn't that some long-dead RPG franchise that's probably best left in the ground? Well, yes -- but Clash of Heroes is about as far from any of the other games in the series as you can get. At its core, it's a puzzle game -- a combat puzzle game -- developed by Capybara, the same team behind PSN's wonderful Critter Crunch. Take that game's core mechanic, add a load of clever new ones and build a story-driven experience around it and you have one of the finest (not to mention most addicting) DS games ever.

Need for Speed: Shift and DiRT 2
I know, I know -- everyone says Forza 3 is the best racing game of the year (or maybe ever), but I'll take these two games any day of the week over it. Sure, it may not let you customize your cars to the nth degree, but for my money, Need For Speed: Shift offers the most intense, realistic auto racing experience yet on a console. (And if you're not playing it from the in-car view, you're really missing out.) When I'm up for something a little more thrilling, I pop in DiRT 2 -- which just makes other off-road racers (save for last year's great Pure) look seriously deficient in almost every respect. It's amazing to look at, and equally enjoyable to play.

Street Fighter IV
I honestly doubted we'd see the day that Street Fighter IV actually existed. I've been a diehard fan of the series since cutting my fighting game teeth on Street Fighter II, so the combination of not only getting a new game in the series for HD console, but one that finally got the classic feel of the series right with 3D trappings, was frankly a little surreal. Now we have Super Street Fighter IV to look forward to -- the only thing I don't miss about the franchise are the countless variations of each release. I say after Super, surprise me again with Street Fighter V.

Canabalt
I tap the screen and the little guy running along the rooftops jumps -- often to his death. But I cant stop tapping. I tap to restart, tap to avoid obstacles, tap to ... fall to my death again. Canabalt is simple -- how far can you run before dying? -- but whether it's on my phone (which I'm surprised doesn't have a hole in its screen from my constant tapping) or on the web, I'm simply addicted.

It looks a lot better than this, I promise!
Excitebike: World Rally
I'm pretty much convinced that the first real sequel to the classic NES dirt bike racer (sorry, Excitebike 64, but you don't count in my book) has received close to zero love, which is a real shame. Maybe it looks a little too retro-y in screens or video, or simply boring, but I can honestly say that it's one of the most fun games I've played all year. The controls are brilliant (so much better than the origina!l) and it'll have you trying over and over and over again to beat your fastest lap -- y'know, kind of like a classic game, which this certainly is.

God of War Collection
Yes, I know that technically neither of the games that comprise God of War Collection were released in 2009, but there's something to be said about playing them again in HD (only complaint: why did many of the cinematics not get up-rezzed?). Even the original GOW truly stands the test of time -- although it's a shame that Chains of Olympus, one of my Best of the Rest picks from last year, didn't make its way onto the disc.

They Let Me Down:
Game I Liked (But Not Loved) and People Think I Hate for Some Reason:

In this article: Apple, best-of-the-rest-2009, Canabalt, capcom, Codemasters, Colin-McRae-DiRT, DiRT, Excitebike, Excitebike-Wii, Excitebike-World-Rally, god-of-war-collection, iPod, Microsoft, might-and-magic-clash-of-heroes, Monster-Games, Need-For-Speed-Shift, Nintendo, Racing, street-fighter, street-fighter-iv, Wii, wiiware, Xbox-360
All products recommended by Engadget are selected by our editorial team, independent of our parent company. Some of our stories include affiliate links. If you buy something through one of these links, we may earn an affiliate commission.
Share
Tweet
Share