R. Lai
@richardlai
January 4th, 2010
In this article: aio, all in one, all in one pc, all-in-one, all-in-one PC, All-in-onePc, AllInOne, AllInOnePc, b500, feature, featured, features, ideacentre, ideacentre b500, IdeacentreB500, impressions, lenovo, lenovo ideacentre b500, LenovoIdeacentreB500, review
We managed to get some nice hands-on time with the Lenovo IdeaCentre B500 while chilling out in Hong Kong, and we're glad to say that up close this all-in-one desktop wasn't too far off the renderings we saw in October. Fans of Transformers might dig those angular corners and brushed metal effect, but we lack the expertise to tell if it'd be an Autobot or a Decepticon. Actually, we do, but we're far too humble to say it out loud. Click on if you're digging a deeper look.
%Gallery-81184%
Lenovo 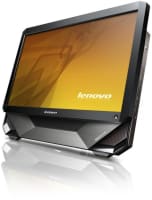 
The B500 isn't just about looks -- it felt sturdy all around as well. Sure, there's that hollow-sounding faux-aluminum cover below the screen, but let's not go all Jeremy Clarkson about this -- it's a feature, not a crime. Similarly, the slim Bluetooth keyboard got us all hot and bothered with its matching brushed metal effect, and it was also great to type on. The BT mouse, on the other hand, was good to work on but lacked some skinning magic. If we must squeeze out a genuine complaint here it'd be that the Bluetooth keyboard didn't play nice with its wireless connection, and we've heard similar reports from other reviews, too.

Now, that straight long cut on the sides of the machine might fool you into thinking you can slide the screen up and down, but the only way to physically adjust the screen is via the hinged support at the back for the unit's tilting angle. Nevertheless, Lenovo still gets brownie points for making a firm yet easy-to-use support, and you can see its full glory in the video below. The rest of the back isn't too shabby either, courtesy of a top diamond-patterned panel (probably a homage to Nokia's Prism collection) and an energetic orange ventilation grille right below.

When you're all set, that vibrant 23-inch 1,920 x 1,080 matte screen is ready for prolonged goggling, and you can put your fingers away as there's no touchscreen option for now. Bizarrely, neither the Hong Kong model nor the US models have a Blu-ray drive option on Lenovo's online store, which even Toshiba would agree doesn't make much sense. Those who are kosher with DVDs will find a tray-loading (as opposed to slot-loading) drive on the right, and we all know you either love it or hate it -- but hey, it's crucial for those cool discs shaped like a business card.


Just below the bottom right of the screen lies a set of touch-activated buttons: one for the lamp below the screen (for your paperwork, perhaps, but we'd place a few miniature plants there), a couple for volume and a couple for screen brightness. Right after those ninja buttons is a handy screen power button -- something that many all-in-ones lack these days, but is much needed for the jukebox-only moments. Speaking of which, you'll probably need some external speakers as the built-in JBL drivers were surprisingly quiet (and we made sure they were cranked to the max).

Expansion-wise there are plenty of ports dotted around the sides and the back: we counted six USB ports, a bog-standard SDHC / xD / MS pro card reader, PS/2 keyboard port (which was another surprise considering it's a world of USB these days), LAN port, AV-in port and a digital TV aerial socket. Our heart hurt a little as eSATA and an HDMI input were nowhere to be seen. On a more positive note, though, the desktop comes with a stylish Media Center remote (goes nicely with the preloaded 64-bit Windows 7 Home Premium), but for some reason this requires plugging in a slant-cylindrical IR receiver via USB, instead of having one built in. If only we can do something about it for now...


As for performance, we must warn you that our experience might not transition well across the Pacific Ocean -- the B500 we had housed an Intel Core 2 Quad Q8400S, but turns out the US version comes with a Pentium Dual-Core E5400 ($799 with 2GB RAM and 320GB 7200rpm HDD) or a Core 2 Duo E7500 ($899 with 4GB RAM and 500GB 7200rpm HDD). Leaving the differences aside, we can agree that hardcore gamers won't get enough out of the B500's NVIDIA GeForce GT240M anyway, but at least Need For Speed Shift was decently playable with the occasional jitter when we tried. Of course, HD videos were not a problem at all as the GT240M stole the decoding work from the CPU. How quaint.


For what Lenovo's offering right now, the IdeaCentre B500 is great for someone looking for a masculine addition to a tidy household, as well as a small TV and DVD player (or you can fork out a hundred bucks for an external Blu-ray drive). A starting price of $799 isn't bad for this spec in an all-in-one desktop either, though we have to confess that MSI's (admittedly less sexy) AE2220 offers a better all-around value (and an HDMI input / touchscreen) for about the same coinage. You may question the machine's lack of touchscreen, but when compared with the Acer Aspire Z5610 you'll see that while the B500's base model is $100 cheaper, it has a more powerful graphics card and a slightly better CPU. So, Autobot or Decepticon?

Update: we spotted a B500 with glossy touchscreen at Intel's CES 2010 booth, but hey, it's either coming soon or "what happens in Vegas stays in Vegas."
All products recommended by Engadget are selected by our editorial team, independent of our parent company. Some of our stories include affiliate links. If you buy something through one of these links, we may earn an affiliate commission.