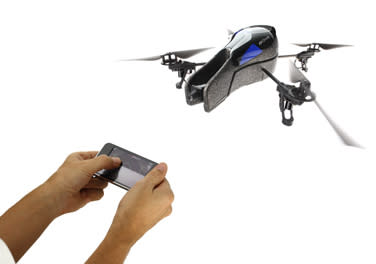 Sure, the iPhone does a commendable job with heavy-duty 3D acceleration for intense virtual reality gaming, but funk that noise -- these guys want to bring you the real thing. Parrot -- better known for its Bluetooth accessories -- has introduced the AR.Drone, a WiFi-enabled remote control helicopter that takes its commands from the iPhone or iPod touch of your choice. The wacky toy has a pair of on-board cameras, one to help steady itself and the other to beam a live bird's-eye view (almost literally, if you pretend for a moment that this is in fact a bird) from the captain's seat onto your phone's screen. Parrot's mainly pushing the hardware here -- it's offering up a host of open source goodies to help developers learn about the product and figure out how to turn it into a must-have toy with replay value, and they'll have plenty of time to do so since it won't be available to consumers until "sometime in 2010." Follow the break for a video of the AR.Drone mercilessly hunting down and destroying all who dare oppose it. In this article: ar.drone, ces, ces 2010, Ces2010, drone, helicopter, parrot, rc, rc helicopter, RcHelicopter, remote control, RemoteControl
All products recommended by Engadget are selected by our editorial team, independent of our parent company. Some of our stories include affiliate links. If you buy something through one of these links, we may earn an affiliate commission.
Share
Tweet
Share