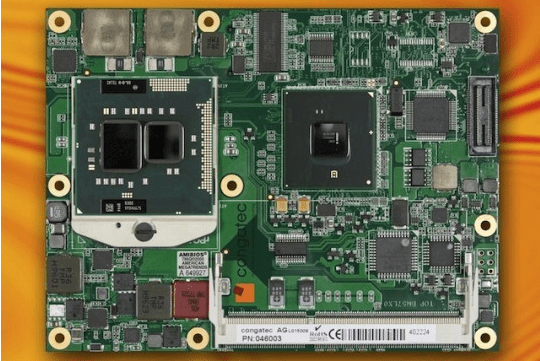 Should you be lusting after some of that Core i7 oomph but have a distaste for the large thermal and physical footprint of desktops, you'll want to hear more from Congatec. A relative unknown hailing from Germany, the outfit has just announced its BM57 small form factor setup, which looks to be ideal for homebrew HTPC enthusiasts -- primarily because its i7-620M CPU is both powerful (up to 3.33GHz with Turbo Boost) and relatively easy to cool (35W TDP, including chip-integrated graphics). The kit is able to support up to 8GB of dual-channel DDR3, as well as drive two video outputs concurrently. Choices include HDMI, DisplayPort and VGA, leading to some tantalizingly versatile possibilities for the creative self-builder. Prices are not yet available, but the BM57 will be demonstrated at the International Gaming Expo in London at the end of this month.
In this article: arrandale, bm57, conga-bm57, congatec, congatec bm57, CongatecBm57, core i7, core i7-620m, CoreI7, CoreI7-620m, cpu, displayport, HDMI, home theater, home theater pc, HomeTheater, HomeTheaterPc, htpc, intel, intel core i7, IntelCoreI7, mobile cpu, MobileCpu, mobo, motherboard, nettops, sff, small form factor, SmallFormFactor
All products recommended by Engadget are selected by our editorial team, independent of our parent company. Some of our stories include affiliate links. If you buy something through one of these links, we may earn an affiliate commission.
Share
Tweet
Share