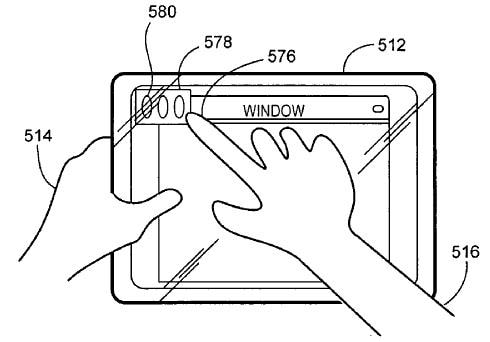 Never say the USPTO doesn't have impeccable timing: on the eve of Apple's tablet launch (and on the very day we finally realized that we've been looking at the same set of Apple patent images in loosely-related filings since 2004), the Patent Office has granted Apple some 13 patents, including #7,653,883 for a proximity-sensing multitouch screen. That's right, granted -- as in, Apple can file a lawsuit if others infringe these ideas now. (Usually we just look at patent applications, which have no legal weight.) The proximity-sensing screen is obviously the most interesting of the bunch, since it's actually related to those same Apple multitouch patents we've been seeing forever -- it describes a touchscreen that can detect when an object (like a finger or a stylus) is close to the screen but not touching it, and then offer up context-dependent controls based on what it detects. Imagine seeing window controls when your hand gets close to the top of the window -- it solves the problem of your finger covering the display. Of course, we have no way of knowing whether it'll be in whatever device is announced tomorrow -- but it's certainly interesting. There's also a fun little design patent granted on the external design of the third-gen iPod nano, and then 11 other patents covering things like color management, bandwidth detection, and, uh, "Method and Apparatus for Selectively Switching IC Ports to Card Slots Through the use of Three Switches per Switch Group." Riveting, we know. Check the full breakdown at the read link.
In this article: apple, display, legal, patent, proximity, proximity screen, proximity sensing, proximity sensor, proximity-sensing, ProximityScreen, ProximitySensing, ProximitySensor, screen, touchscreen
All products recommended by Engadget are selected by our editorial team, independent of our parent company. Some of our stories include affiliate links. If you buy something through one of these links, we may earn an affiliate commission.
Share
Tweet
Share