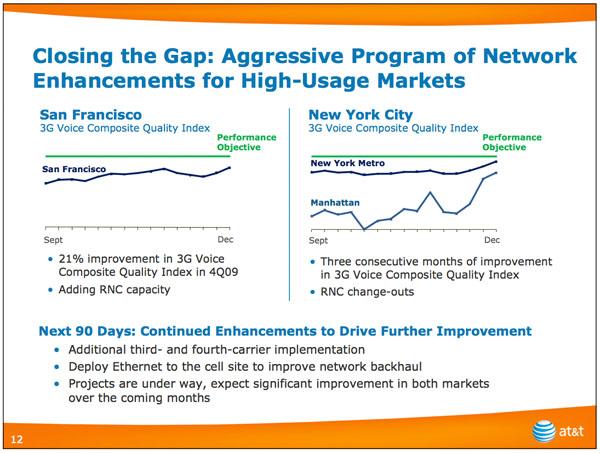 AT&T spent a good bit of its earnings call today talking about its network -- not too surprising, really, considering the cozy relationship between dropped calls, subscriber count, and profit. The overall takeaway was that the company is pleased with its progress and continues to improve thanks to the addition of new carriers at existing cell sites (read: increased over-the-air capacity), an ongoing backhaul renovation, and the recent roll-out of 7.2Mbps capability across most of its 3G footprint. In terms of dropped calls specifically, AT&T claims that the statistic dropped network-wide from 1.41 percent to 1.05 percent between December '08 and '09 -- not bad, though the real problems seem to be in key high-density, high-visibility markets like Manhattan where it hasn't yet met its vaguely-defined "performance objective." That said, it seems convinced that it'll patch things up over the next few months as it continues its infrastructure push -- and considering that Apple's entrusting AT&T with the iPad, we don't doubt that there's some work underway to mute the cries of "we want Verizon" about 90 days from now. Then again, there's no substitute for real-world experience, so we'll dare pose the question: are you seeing improvement in your neck of the woods? Follow the break for another juicy slide out of AT&T's earnings deck.

In this article: 7.2mbps, att, backhaul, blocked calls, BlockedCalls, dropped calls, DroppedCalls, hspa, network
All products recommended by Engadget are selected by our editorial team, independent of our parent company. Some of our stories include affiliate links. If you buy something through one of these links, we may earn an affiliate commission.
Share
Tweet
Share