So it's been a long day, you plop down on the couch, turn on the TV and grab your laptop and a cold beverage. But while you're watching that re-run of The Office on TBS you come across an awesome video on the web – probably the Engadget Show – and instead of watching that expensive 40-inch HDTV you end up staring at the smaller screen. Okay, so maybe that's our specific scenario, but you'd probably hook up your laptop to a TV in a number of different situations if it didn't involve cables, dongles, and extra software -- basically if it were just easier. Well, it's supposed to be with the $999 Toshiba Satellite E205 and its included Netgear Push2TV adapter.

Exclusively sold at Best Buy as part of its Blue Label program, the 15-inch Core i5-powered laptop is outfitted with Intel's Wireless Display -- what we've taken to calling WiDi -- which wirelessly connects the laptop to any HDTV using the included Netgear with just the push of a button. But can you really watch Hulu on the big screen without leaving your couch? And is the E205 even a laptop you'd want to use in the first place? We've been "testing" it -- or watching loads of web video on our TV -- for the last couple of days to find out. Read on for our full review!
%Gallery-84327%
Toshiba 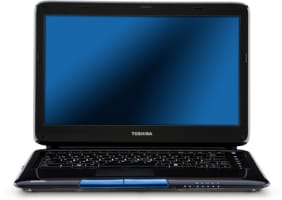 Apparently Best Buy likes its laptops to match its employees and thus has dressed the Satellite E205 in a very shiny royal blue. (Part of Toshiba's deal with Best Buy's Blue Label program is that the retailer gets to make design suggestions based on its customer feedback.) The glossy lid picks up a ton of fingerprints, even with its subtle pattern, but other than that we like the rounded chassis, especially the unique hinge which props up the screen on top of the bottom deck.

The 1.2-inch thick, 5.1-pound E205 doesn't fall into the thin and light category, but for a 14-inch mainstream laptop it's actually fairly trim. There's also enough space to house a number of ports, including two USB ports, a combo USB/e-SATA, HDMI, VGA, Ethernet, a card reader, mic and headphone jacks and a slot-loading optical drive. Obviously, the entirely-plastic machine doesn't feel as sturdy as a metal-clad system, like the Envy 15 or a MacBook Pro, but its accelerometer-protected hard drive should help it withstand some bumps and bruises.

The E205's plastic keys are coated in a gloss of sorts which feels nice on the fingers, but results in them becoming smudged in prints -- we're starting to see why Toshiba includes that cloth. Though the keys have a lot of give, the typing experience was quite comfortable, and unlike some past Toshiba laptops there's no noticeable flex to the panel. For those dimly lit times, you can activate the backlight on the keyboard by tapping on the lightbulb icon on the strip of multimedia touch controls. Quite surprisingly, all those touch buttons are responsive and don't require too firm of a press like the ones on HP Pavilions.

Like many other recent laptops, the trackpad is flush with the case and differentiated only by a rougher surface, which we found comfortable on our index finger. It also supports multitouch gestures, and while two-finger scrolling actually worked well we disabled the pinch-to-zoom function because it, like lots of other pads we've been seeing, was overly sensitive. However, we just don't recommend you to use the pad in conjunction with the stiff right and left mouse buttons. We're sure they can be broken in, but the side of our thumb actually showed some irritation from having to press so hard.

The 14-inch, 1366 x 768 resolution LED screen is plenty bright, and watching an episode of Cougar Town was crisp, though we're not sure even the nicest OLED screen could make the show appear halfway decent. But the glossiness gets in the way of things, not to mention tilting the screen back to about an 135 degree angle caused parts of the screen to be unviewable. Horizontal viewing angles, on the other hand, weren't too bad.

We know, enough already about the regular laptop stuff and tell us how Intel's Wireless Display technology works! Overall, we've got to say it's really impressive, though there are a few caveats. But the good news first – the out of the box experience couldn't be easier. Seriously, we're pretty sure any of our tech-challenged friends could figure this out without even opening the manual. It was as simple as plugging the Netgear Push2TV box (usually $99, but included with the E205) into one of the HDMI ports on our 40-inch Toshiba HDTV (you can also use component), and then pressing the wireless display button on the laptop's touch control strip. The Intel Wireless display software appeared on the E205, automatically found the Netgear, and within seven seconds of hitting connect the Win 7 desktop was nice and big on the TV. Because Intel's Wireless Display technology uses its own My WiFi technology, which creates a wireless N personal area network to connect to the Netgear adapter, there's no need to configure a router or network. We should mention that this requires an all Intel package, including the new Core i3 and i5 processors and HD graphics.

Once our desktop showed up on our TV it was smooth operating, though there's a noticeable two second lag between what happens on the laptop and what shows up on screen. That actually didn't bother us as much as you'd think since the video and audio on the TV were completely in sync. For instance, watching a 720p YouTube video of Miley Cyrus' "Party in the USA" at full screen was smooth and sounded great. It was the same case with a 1080p Iron Man 2 trailer in both QuickTime and Windows Media Player, but it was only output at 1280 x 768 since the technology doesn't support full 1080p HD playback yet -- it's fixed at 720p. We didn't have much of an issue with distance given that our couch was only about 15 feet away from the TV, but even when we walked about 50 feet away from the TV the laptop's content showed clearly on the TV. By the way, the setup also works awesomely as a wireless music solution; playing our Pandora channel over our home theater's speakers sounded superb. Sonos, what?


So, what are the issues? The E205's display can only be mirrored, so extending the desktop to a TV is out of the question. Dragging a video to the TV to free up the E205's screen to chat or send e-mails would be great, but isn't going to happen right now. Additionally, WiDi also doesn't support playback of DRM'd DVDs or Blu-ray discs; when we tried to watch Empire Records on the E205's on-board DVD player we got sound, but no picture on both the laptop and the TV. Good thing we had an actual DVD player. But regardless of these hold ups, we've got to say hooking up a laptop to a TV to watch content is mindblowingly easy, and call us lazy, but the fact that you don't have to get up from the couch is wonderful.

We're also very impressed with the E205's performance thanks to its 2.2 GHz Core i5-430M processor and 4GB of RAM. The Windows 7 Home Premium system showed little to no performance hit while running Microsoft Word 2007, TweetDeck, iTunes and Firefox with multiple tabs, and simultaneously playing a DVD in the background. Since it's one of the first Core i5 laptops we tested we went ahead and compared it to a $799 Acer Aspire 5738PG powered by a previous Centrino 2, 2.53GHz Core 2 Duo processor. As you can see in the chart below the Corei5'd E205 bested it by at least 1000 points on the PCMark Vantage performance benchmark.

As for graphics, the E205 sticks with just Intel's integrated GMA HD which was just fine for playing local as well as streaming 1080p video. When it came to gaming we could keep up with slaying gnomes in WoW at an average of 27fps (set at native resolution), but when we attempted to throw some punches in Batman: Arkham Asylum the 8fps didn't cut it. We should also mention that the $999 model includes 500GB of storage which is a downright good deal.

The E205's six-cell, 63Wh battery busted out a decent 3 and a half hours on our video rundown test with brightness set to 65 percent. That isn't as long as a netbook or ULV laptop, but we got about four and a half hours of use when just writing and surfing the web which isn't too bad for this class of laptop. Toshiba's loaded up this puppy with its typical proprietary software, including its Bulletin Board and ReelTime applications. However, it's what Best Buy's put on that's a bit peeving -- the Best Buy Software Installer, which is basically a digital version of the retailer's box software aisle, popped up more often than we'd like.

Sure, there are other solutions for hooking your laptop up to your TV wirelessly -- there's wireless USB solutions like the Atlona HD-AiR and IOGEAR's Wireless Audio/Video kit -- but if you're looking for a solid everyday laptop for under a grand, the E205's ability to stream HD video without any added cables or dongles makes it a no-brainer. We haven't tested the Sony VAIO S or Dell Studio S15Z, which are also Blue Label laptops with the same with the same Intel Wireless Display tech, but our only real misgivings about E205 are its touchpad buttons and fingerprinty lid and keyboard. And frankly if you had asked us about those complaints while we were watching some YouTube clips on the big screen, instead of playing around with cables or adjusting software, we probably wouldn't have even remembered we had them.
All products recommended by Engadget are selected by our editorial team, independent of our parent company. Some of our stories include affiliate links. If you buy something through one of these links, we may earn an affiliate commission.