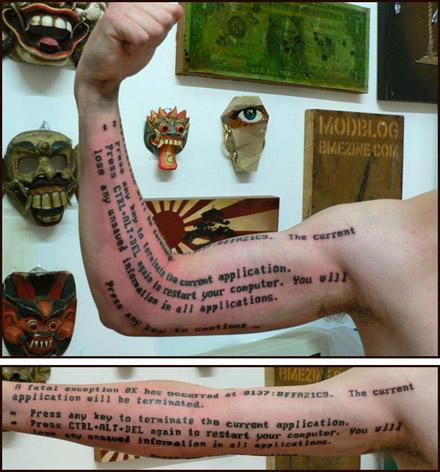 Looks like Patch Tuesday turned into BSOD Tuesday for some Windows XP users -- Microsoft's latest security updates for the venerable OS are causing blue screens and endless reboots for people. That's the word according to a growing support thread on Microsoft's site -- and making matters just slightly worse / funnier, it's apparently the patch for that 17-year-old DOS vulnerability that's causing all the trouble. You win some, you lose some, right? Microsoft's identified a fix for those with access to an XP install disc and an optical drive, but that leaves most netbook users out in the cold -- and considering netbooks are where most of the recent XP action's been going down lately, we're hoping a better solution comes down the pike soon.

P.S.- That's the BSOD tattoo guy in the photo -- remember him?

[Thanks, HyperSl4ck3r]
In this article: blue screen of death, BlueScreenOfDeath, bsod, bug, bugs, dos, dos bug, DosBug, error, KB977165, microsoft, patch, Patch Tuesday, PatchTuesday, security update, SecurityUpdate, software, update, windows, windows xp, WindowsXp, xp
All products recommended by Engadget are selected by our editorial team, independent of our parent company. Some of our stories include affiliate links. If you buy something through one of these links, we may earn an affiliate commission.
Share
Tweet
Share