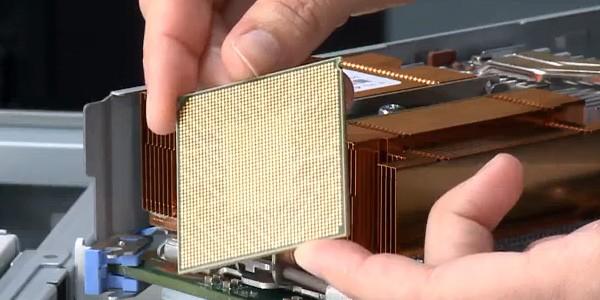 Sure, there's not much chance of popping down to your local hypermarket and picking up something with a Power7 roaring inside, but there's also nothing stopping you from a bit of vicarious investigation, now is there? IBM's eight-core, 1.2 billion-transistor Power7 chips have begun shipping as promised, with the entry-level Power 750 Express starting at a few bucks over $34,000. That offers you some truly supreme computing power, as each of the eight cores can run four simultaneous threads for up to 32 parallel tasks, with 8MB of embedded DRAM (acting as L3 cache) per core. The top-tier POWER 780 system maxes out with either eight 3.8GHz eight-core chips or eight 4.1GHz quad-core units, allied to a maximum of 2TB of DDR3 RAM and up to 24 SSDs -- though you'll have to call IBM to find out the price (presumably so that a trained professional can counsel you after hearing the spectacular number). Watch the video after the break while we try to cajole IBM into sending us one for benchmarking.
In this article: cpu, edram, ibm, ibm power 750 express, ibm power 755, ibm power 770, ibm power 780, ibm power7, IbmPower7, IbmPower750Express, IbmPower755, IbmPower770, IbmPower780, power7, power7 server, power7 servers, Power7Server, Power7Servers, processor, server, servers
All products recommended by Engadget are selected by our editorial team, independent of our parent company. Some of our stories include affiliate links. If you buy something through one of these links, we may earn an affiliate commission.
Share
Tweet
Share