So, we had a few precious moments to play around with Garmin-Asus' latest Nuvifones here in lovely Barcelona today -- the M10 and A50, running on Windows Mobile 6.5.3 and Android 1.6, respectively -- and even better, we did so in the back of a black Mercedes expressly purposed for testing out the integrated turn-by-turn capabilities. Follow the break for our quick impressions! 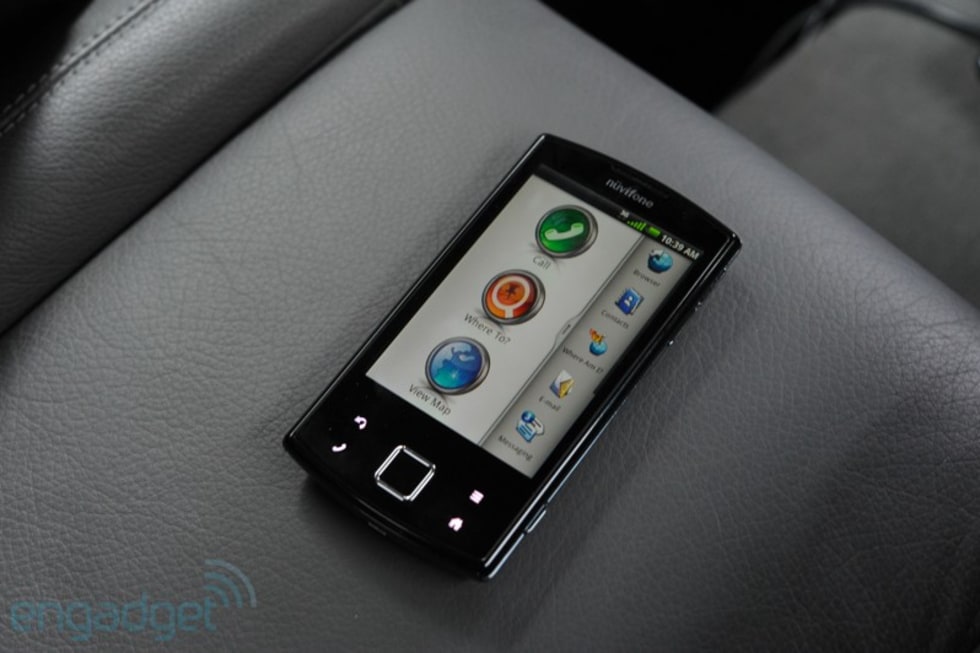 The A50 feels and looks great from the front, but less so from the rear -- it's just no-frills black plastic, but on the upside, it's probably not going to slide out of your hand too easily. The car dock connector is on the side of the phone, which makes it possible to use a Nuvi-style dock with a mega-simple latching mechanism, but one connector that's sadly missing is the 3.5mm headphone jack -- it's a tragic oversight for any multimedia-capable device these days, particularly a smartphone. Then again, media isn't where this particular Android set seeks to stand out; it's all in the software, rather, and Garmin's done a ton of customization to turn the Donut base into a beast all its own (and don't worry, they say the phone can be and will be upgraded, they're just not putting a timeline out there yet). Unlike Sense and Blur, the Nuvifone-style home screen is totally unrecognizable by Android standards -- it's got giant Call, Where To, and View Map buttons on the left accompanied by a customizable strip of icons on the left (which work in lieu of the usual ability to drop icons anywhere you like on the home screen). The turn-by-turn navigation looks as good as anything you'll find on the market, loading reasonably fast (though there's no such thing as "too fast" when it comes to this kind of stuff). Plus, the fact that the basemaps are on ROM is a huge win and a differentiator for Garmin -- we think they'll need to really emphasize that point to see some market penetration.

The M10, meanwhile, is reasonably sexy, but we prefer the A50's simple good looks by the thinnest of margins. It's obviously being billed as a slightly higher-end device than the A50 on account of the 5 megapixel cam (up from the A50's 3) and the inclusion of a 3.5mm jack, but what really struck us was Windows Mobile 6.5.3 -- obviously WinMo's still got a ton of issues in its present-day form, but 6.5.3 takes the paradigm just about as close as it can be to finger-friendliness as possible. If you're still a stylus kind of person, though, don't worry -- you've got one discreetly tucked around back.

Perhaps what impressed us the most about these two devices is how similar their turn-by-turn experiences are -- Garmin's basically made it so that you can take the platform of your choice and sprinkle in navigation capability equivalent to a high-end Nuvi. Broad carrier adoption might still be the biggest single barrier to making Garmin-Asus a competitive joint venture, but with these two phones -- the A50 in particular -- they're taking baby steps in the right direction.
In this article: a50, android, asus, garmin, garmin asus, garmin-asus, GarminAsus, hands-on, m10, mwc, mwc 2010, Mwc2010, windows mobile, windows mobile 6.5.3, WindowsMobile, WindowsMobile6.5.3, winmo
All products recommended by Engadget are selected by our editorial team, independent of our parent company. Some of our stories include affiliate links. If you buy something through one of these links, we may earn an affiliate commission.
Share
Tweet
Share