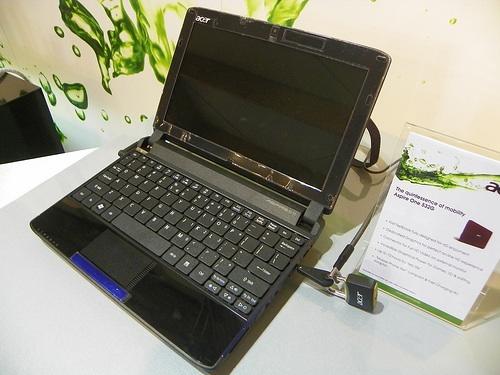 Well here's one we didn't expect to come out of MWC. Acer decided to throw some netbook news into its Liquid E press conference with the 10.1-inch Aspire One 532G -- the first netbook with NVIDIA's Ion 2. Not withstanding the addition of the HDMI port and HD display, the Pine Trail netbook has the same chassis as the previously reviewed 532h, but inside it's a whole different story -- its 1.66GHz Intel Atom N450 processor, GMA 3150 GPU graphics, 2GB of RAM and 320GB hard drive will be joined by a discrete NVIDIA GPU. As confirmed by the press release below, it will use NVIDIA's new Optimus automatic switching technology, though it appears Acer is holding out for NVIDIA to officially launch the platform at CeBit to reveal details of the GPU -- but a GeForce G310 seems likely from the rumors. The high-def capable netbook should be available in March, but we'll be listening for a price and more news on this one. In the meantime, hit the break for a relaxing hands-on video and the full PR.

With up to 10 hours* of battery life, integrated Wi-Fi®, 10.1" Hi-Def LED backlit display and optional 3G, the Aspire One 532G matches outstanding performance with an ultra-compact design, offering all the power you need. Netbook users can now enjoy flawless Hi-Def web content streaming and multiple Internet applications with ease.

Smart power and Hi-Def performance
The Aspire One 532G makes no compromise on great performance and battery life; it mobilizes online Hi-Def computing, at the same time lowers power consumption for longer-lasting battery. NVIDIA® Optimus™ Technology intelligently, automatically, and seamlessly transitions between the powerful NVIDIA® ION™ GPU, and battery-saving integrated graphics – depending on the needs of the application – delivering great battery life and great performance when you need it.

Care-free mobile companion
Making light work of Internet multi-tasking, the Aspire One 532G needs only a single charge for up to 10 hours* of cable-free power, enabling users to stay connected and get the most on-the-go. The innovative AC adapter is travel friendly, lighter than typical adapters, saves 1/3 charging time and comes with interchangeable AC converters. No matter where you are, you can always have the right plug.

This highly efficient netbook is Energy Star® v5.0 qualified and compliant with RoHS and WEEE EU directives, regulating the use and disposal of hazardous substances in electrical and electronic equipment. It also features LED backlight, making it mercury free.

The Aspire One 532G will start shipping at the end of Q1 2010.
In this article: acer, acer aspire one, Acer Aspire One 532G, AcerAspireOne, AcerAspireOne532g, aspire one, Aspire One 532G, AspireOne, AspireOne532g, ion 2, Ion2, mwc, mwc 2010, Mwc2010, NetBook, nvidia ion 2, NvidiaIon2
All products recommended by Engadget are selected by our editorial team, independent of our parent company. Some of our stories include affiliate links. If you buy something through one of these links, we may earn an affiliate commission.
Share
Tweet
Share