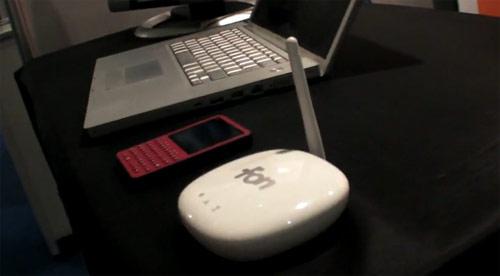 If you've never heard of Fon, its mission is pretty simple: to equip the world with Fonera routers, and thus blanket the planet in WiFi that no one is scared to share. Over at Mobile World Congress this week, the company unveiled a new device that exploits the impending bandwidth crisis that operators all over the globe are attempting to deal with. The all-new SIMPL is a palm-sized router that has just two Ethernet ports and could be doled out by carriers in order to provide a city-wide WiFi network that can be accessed by any WiFi-enabled phone, thereby easing the demand on its 3G network. Equipped with 802.11n, a faster CPU than the Fonera 2.0 and a shiny white shell, we're told that an order has already been placed by an undisclosed customer for 400,000 of 'em, though it's unclear when these will be made available to the general public and for how much. Hop on past the break for a five minute showcase video.

See more video at our hub!
In this article: 3g, 3g router, 3gRouter, fon, Fonera, Fonera simpl, FoneraSimpl, mobile broadband, mobile internet, MobileBroadband, MobileInternet, modem, mwc, mwc 2010, Mwc2010, router, SIMPL, video, wifi, wifi router, WifiRouter, wlan
All products recommended by Engadget are selected by our editorial team, independent of our parent company. Some of our stories include affiliate links. If you buy something through one of these links, we may earn an affiliate commission.
Share
Tweet
Share