Heroes of the Storm: Stitches

Motorola Milestone to get Android 2.2 in Europe and Korea in late Q4, Dext 2.1 upgrade looking bleak 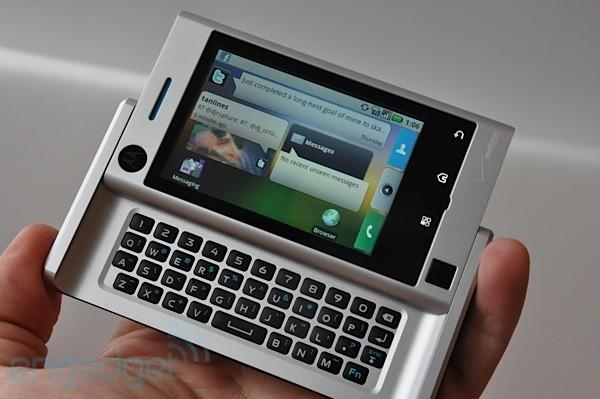 We've got Motorola's latest Blur handset in hand, Devour-ing ill-advised puns like it's a full time job. You can check out this aluminum slider in all its consumer-friendly glory in the gallery below, see it sized up against big brother Droid right below that, and there are some initial impressions and a video walkthrough after the break.

Here are some of our initial thoughts:
The phone will then hit Verizon stores in March for $150 after a $100 mail-in rebate. Buyers will also need to sign up for a Nationwide Talk plan and the $30 unlimited data package, part of Verizon's new-ish smartphone plan restrictions -- though really, you're not going to get much done on this phone without a data plan.

Update: We got some bad information, and now have the official Best Buy pricing straight from Best Buy's Facebook page: The Devour will retail for $99 starting on February 25th, but the Droid will also be dropped to $99, and the Droid Eris is going to be free from Big Blue. Meanwhile, Verizon is sticking to its $149 pricetag at its own stores, which involves a $100 rebate. (Thanks to everyone who pointed this out).

In this article: devour, hands-on, moto, moto blur, MotoBlur, motorola, motorola devour, MotorolaDevour, unboxing, verizon, verizon wireless, VerizonWireless
All products recommended by Engadget are selected by our editorial team, independent of our parent company. Some of our stories include affiliate links. If you buy something through one of these links, we may earn an affiliate commission.
Share
Tweet
Share