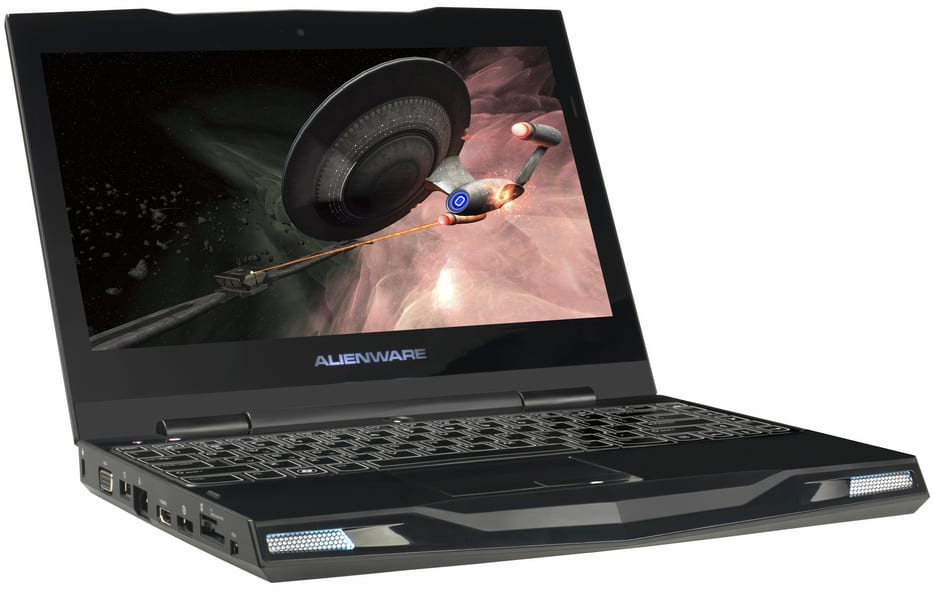 We've been itching to get our hands on the Alienware M11x ever since we first saw it at CES -- it's one of the most interesting riffs on the thin-and-light we've seen in a long time. Sure, it's compact, but inside it's got a ULV Core 2 Duo paired with a switchable NVIDIA GT335M GPU, making it one of the most powerful small laptops on the market. But power never comes cheap: the M11x starts at $799, and our tester model equipped with an upgraded 1.3GHz SU7300 Core 2 Duo and 4GB of RAM clocks in at $949. That's pricey, but potentially worth it if you're a serious gamer on the go. You know we had to test one and find out -- let's see if the M11x can back up those looks with performance.

Special thanks to our new favorite reader Joe Kelly, who loaned us his M11x for this review!

How would you rate the M11x?
We want to hear what you think. Post a quick review now to join the conversation!
Write a review

The M11x certainly has its share of swoopy curves -- if you squint just right, the front end looks almost exactly like a Camaro -- but it's actually boxier overall than you'd expect, with flat sides and hard edges around the rest of the case. We'd almost say the effect is somewhat businesslike, but no one's going to confuse a laptop with this many LED lighting options for a business machine. We just wish Alienware had used the soft-touch matte finish found on top of the keyboard deck all over the machine, rather than glossy black paint; the combination of the finish and the flat surfaces looks a hair cheaper than you'd expect.

Around the sides you'll find a healthy array of ports: VGA, a powered USB port for charging other devices, Ethernet, HDMI, DisplayPort, a card reader and a four-pin FireWire jack line the left side, while the right sports a mic jack, dual heaphone ports, two more USB ports, and a vast expanse of glossy black plastic. Only a power port graces the back, but on the bottom you'll find a fairly large fan, a battery meter, and a little Alienware plaque commemorating your purchase. The M11x is also quite heavy for a smaller machine at 4.5 pounds -- that's as much as, say, the 13-inch MacBook Pro, and you can certainly feel its heft when you hold it.

No chiclet keyboard here -- instead there's a relatively flat backlit unit with a tweaked layout designed for gaming. We'd be totally remiss if we didn't spend some more time talking about the crazy AlienFX LED lighting effects -- you can set the keyboard backlight, Alienware logo, power button, speakers, and even status indicators to be nearly any color you want, have them fade between two colors, or just blink incessantly. It's totally unnecessary, and incredibly fun -- we spent 30 minutes tricking out our tester in an Elvis-inspired hot pink-and-blue motif before settling into more aggressive red and orange scheme. Sure, it's old news to anyone who's bought a larger Alienware machine, but it's fairly wild to see such a feature in a laptop that starts at $799.

We could have lived without the dedicated menu key and a smaller right Shift if that had meant a larger arrow layout, but overall the keyboard is quite nice, and you can certainly pull off WASD when it's time to game. The trackpad is similarly nice: no mulititouch here, but we've always like textured touchpads, and tracking was nice and accurate. We just wish the buttons were a bit bigger -- we found ourselves clicking dead plastic at the lip of the machine quite often.

We've been harping on crappy displays in cheaper laptops for a while now, but the M11x is the rare low-end machine in a company's lineup that doesn't compromise on the LCD. The 11.6-inch 1366 x 768 LED-backlit display is bright, sharp and has terrific horizontal viewing angles. The vertical viewing angle is a little narrower, but it's easy to find the sweet spot -- kudos to Alienware for using a good panel here instead of trying to lower the price with a substandard display. We just wish it wasn't so, so glossy.

So do the 1.3GHz SU7300 Core 2 Duo and switchable NVIDIA GT335M GPU have the horsepower to make the M11x a credible gaming machine? The numbers tell the story: with the GT335M switched off, the M11x performed like pretty much any other ULV laptop with integrated GMA graphics, notching a PCMarkVantage3 score of 2698, and a 3DMark06 score of just 654. But turning on the GT335M had a pretty dramatic impact, boosting the PCMarkVantage3 score to 3141 and the 3DMark06 score to 5593. That's significantly lower than the "over 6,100" Alienware claims, but real-world, Batman: Arkham Asylum ran at an easy 25-28fps running at native res with a peak of 42fps and Portal went at 130-200fps -- not bad at all. Our man Joe Kelly also found that Crysis running at native res with 2x anti-aliasing cranked out 8fps in Very High, around 15fps in High, and 20-30fps in Medium, and it wasn't playable with 4x AA in Very High. BioShock at maxed settings produced a peak of 120fps, although that fell to 55fps during scenes with water or lots of action. So not too shabby overall, but your face is probably going to remain un-melted.


In addition to ULV-like performance, we also got ULV-like battery life when using the integrated GMA 4500MHD graphics: our video rundown test went for 4.5 hours, which is about average. But flip on that NVIDIA GPU and things change fast -- the fan turned on almost instantly every time we swapped graphics, and the heat output of the system increased noticeably. We weren't able to test battery life to completion with the GPU on, but the meter certainly ran down much faster -- we wouldn't expect to get much more than two and a half or three hours of use with the NVIDIA chip active. And remember -- the battery is integrated into the system, so airline gamers can't just pack a second battery and go.

Here's the thing about switching the graphics on this machine, though: now that NVIDIA's seamless Optimus hybrid graphics system is shipping on the ASUS UL50Vf, having the M11x tell you to quit certain apps and black out the screen while it switches GPUs feels positively hacky. It's not the worst thing in the world, but it's hard knowing that there's such a better automatic solution out there -- especially since you'll want to switch back and forth quite a bit to max out battery life. We wouldn't let it stop us from getting one, but we have to wonder why NVIDIA and Dell didn't get together and put Optimus on the M11x right from the start, since it's such a perfect fit. We certainly expect to see it on a later version.

It's hard not to love the M11x after spending some time with it. It takes the traditional laptop and netbook formula and tilts the balance in unconventional ways, resulting in novel tradeoffs. It's sized like a netbook but it costs as much as many mainstream laptops -- and weighs as much as some of them. It has a slow CPU but a fast GPU that eats battery power voraciously enough that we'd probably just leave switched off until it was time to game -- otherwise known as "most of the time" for us. It purposefully looks like a cross between a muscle car and spaceship. Whether or not these particular choices appeal to you probably depends on how much GPU-dependent gaming you do on the go, and how much you're willing to spend on a machine with a smaller screen. We're pretty sure those of you who run out to buy one right this second won't be disappointed, but we're going to hold out for NVIDIA Optimus, and maybe a slightly faster processor -- all the while dreaming of keyboards backlit in Engadget blue.
In this article: alienware, alienware m11x, AlienwareM11x, core 2 duo, Core2Duo, dell, gaming laptop, GamingLaptop, gt335m, laptop, m11x, nvidia gt335m, NvidiaGt335m, review, reviews, su7300, thin and light, ThinAndLight, ulv
All products recommended by Engadget are selected by our editorial team, independent of our parent company. Some of our stories include affiliate links. If you buy something through one of these links, we may earn an affiliate commission.
Share
Tweet
Share