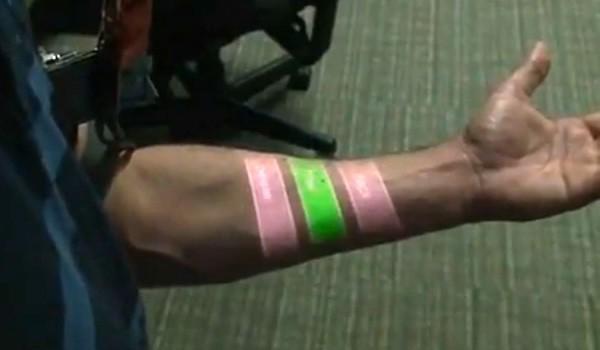 Microsoft looks to be on a bit of a hot streak with innovations lately, and though this here project hasn't received much hype (yet), we'd say it's one of the most ingenious user interface concepts we've come across. Skinput is based on an armband straddling the wearer's biceps and detecting the small vibrations generated when the user taps the skin of his arm. Due to different bone densities, tissue mass and muscle size, unique acoustic signatures can be identified for particular parts of the arm or hand (including fingers), allowing people to literally control their gear by touching themselves. The added pico projector is there just for convenience, and we can totally see ourselves using this by simply memorizing the five input points (current maximum, 95.5 percent accuracy), particularly since the band works even if you're running. Make your way past the break to see Tetris played in a whole new way.

In this article: acoustic, arm, armband, arms, bioacoustic, Carnegie Mellon, Carnegie Mellon University, CarnegieMellon, CarnegieMellonUniversity, fingers, hands, input, Microsoft, pico projector, PicoProjector, quirky, research, skin, skin input, skin touchscreen, SkinInput, skinput, SkinTouchscreen, touchscreen, university, video
All products recommended by Engadget are selected by our editorial team, independent of our parent company. Some of our stories include affiliate links. If you buy something through one of these links, we may earn an affiliate commission.
Share
Tweet
Share