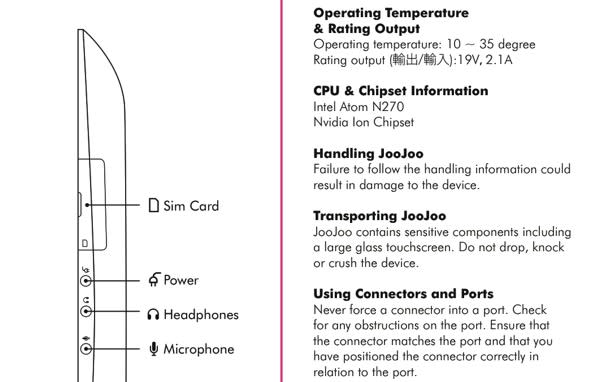 Well well. We'd always suspected that the JooJoo tablet was hiding something extra to run HD video and Flash, and it's just hit the FCC with full documentation and a teardown confirming that there's an NVIDIA Ion GPU paired with an Atom N270 packed inside. We're also seeing a 3G card in there, although it's unclear whether it'll be active or installed at launch -- we've been told the 3G version won't be ready until sometime later this year, but things have been changing fast, so that may be in flux as well. There's also a picture showing it running Windows, but we're assuming that's just for testing purposes -- we'd also bet it'd be an easy little hack. But back to Ion for a second: our experience with first-gen Ion netbooks has been one of decreased performance and drastically reduced battery life, so we're very curious to see how the JooJoo holds up compared to modern netbooks running Intel's Pine Trail chips and NVIDIA's Optimus-based Ion 2. We'll see -- it's supposed to ship in just a few weeks. Two more pics after the break.

P.S.- Oh, and Fusion Garage got back to us yesterday with a list of supported local video formats, and it's pretty decent: AVI, MPEG-4, MOV, WMV and WMA, FLV (Flash Video), VOB, OGG, OGM and OGV, MKV (Mastroska), DiVX and XViD. We'll see how the battery holds up, though -- our very own Joanna Stern predicts a best case of 3.5 hours with WiFi on and a video playback time of two hours.

In this article: 3g, atom, fusion garage, FusionGarage, intel, ion, joojoo, n270, nvidia, nvidia ion, NvidiaIon, sim, sim card, SimCard, wwan
All products recommended by Engadget are selected by our editorial team, independent of our parent company. Some of our stories include affiliate links. If you buy something through one of these links, we may earn an affiliate commission.
Share
Tweet
Share