Latest in Freedom of speech

Afghanistan won’t ban WhatsApp or Telegram after all

Supreme Court: online threats must be intentional to be illegal 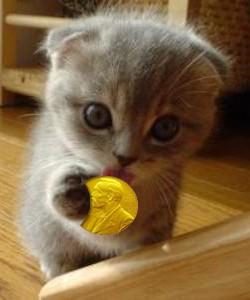 Isn't Italy a place of contrast? After the country's judiciary slammed Google for failing to keep a tight enough leash on user-uploaded content, we're now hearing that its local version of Wired magazine is putting forward the internet as a candidate for the Nobel Peace Prize in recognition of its contributions to "helping advance dialogue, debate and consensus." Right then. Just in case you think this is all a bit silly -- and you should -- we're also hearing Nicholas Negroponte and 2003 Nobel laureate Shirin Ebadi are both in support of the idea, which has been described as "a Nobel for each and every one of us" by Internet for Peace, an organization set up specifically to promote the web's candidacy. That's a pretty succinct way of putting it, but it also shows what's wrong with the idea: nothing devalues a prize's worth and meaning quite like handing it out to everyone. Just imagine icanhascheezburger.com slapping a legitimate Nobel laureate badge up on its homepage and you'll know what we mean.

In this article: freedom of speech, FreedomOfSpeech, internet, italy, negroponte, nicholas negroponte, NicholasNegroponte, nobel, nobel peace prize, nobel prize, nobel prize nomination, NobelPeacePrize, NobelPrize, NobelPrizeNomination, nomination, shirin ebadi, ShirinEbadi, worldwideweb
All products recommended by Engadget are selected by our editorial team, independent of our parent company. Some of our stories include affiliate links. If you buy something through one of these links, we may earn an affiliate commission.
Share
Tweet
Share