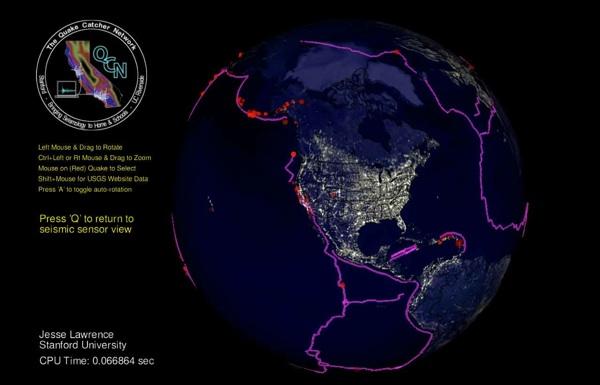 Stanford's Quake-Catcher Network has been up and running since early 2008, but it looks like it's just now starting to reach the critical mass of users that's essential for its success. As you may be aware, the software takes advantage of the accelerometers built into many new laptops to watch for any signs of shaking or vibration, which it then compares with data from other laptops in the same area -- if they're all shaking at the same time, that's a pretty good indication there's an earthquake happening. Until recently, however, there hasn't been enough users in any particular area to produce reliable data, but Stanford now counts more than 450 users in California alone, which has provided it with its first truly viable testbed. Of course, more users would be even better, and you can sign up and download the software at the link below if you're interested in helping out.
In this article: accelerometer, california, distributed computing, DistributedComputing, earthquake, earthquakes, quake catcher, quake catcher network, quake-catcher, quake-catcher network, Quake-catcherNetwork, QuakeCatcher, QuakeCatcherNetwork, stanford
All products recommended by Engadget are selected by our editorial team, independent of our parent company. Some of our stories include affiliate links. If you buy something through one of these links, we may earn an affiliate commission.
Share
Tweet
Share