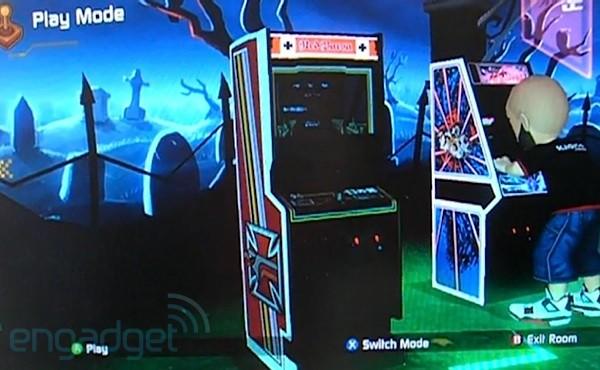 Microsoft showed off its new retro-tastic Game Room UI for Xbox 360 in playable form at GDC last week. While the "make a virtual representation of a gaming space" idea might seem ripped straight from Sony's Home, there aren't really any actual similarities -- outside of the fact they're both in 3D, at least. You dive disembodied through the different game rooms pretty intuitively, with different company collections on the bottom "level" of the mall-like UI, and upper levels set aside for your own collections of the games. Unfortunately, once you actually select an arcade cabinet, the UI gets rather overly complex, with all sorts of modes you can play the game in, sorts of scores to be tracked and an indecipherable menu tree that makes it a real chore to exit a game. We're sure arcade fanatics, ready to pit their scores against the best of them and looking for truly in-depth functionality are going to love all this, but for us poor simpletons it's a little much to take in all at once. Luckily, Microsoft saved the best for the actual gameplay. Not only does it nicely emulate inserting coins and even entering in codes on a virtual keypad, but when playing games in the non-ranked classic mode there's a "rewind" function accessible at any time with the tug of the left trigger. The screen gets those VHS-style wavey lines and you can mend your errors instead of losing a valuable life or having to start from the beginning. It's perfect for patching over the quarter-munching difficulty of some of these games, and it might even be enough to pull us away from our polygon-drenched gorefests now and then to don an inexplicable bear avatar and spelunk some Crystal Castles. Check out a video of Game Room after the break, and stand by for a launch of the service on March 24.

In this article: arcade, arcade games, ArcadeGames, game room, GameRoom, gdc, gdc 2010, Gdc2010, hands-on, microsoft, virtual arcade, VirtualArcade, xbox 360, xbox live, Xbox360, XboxLive
All products recommended by Engadget are selected by our editorial team, independent of our parent company. Some of our stories include affiliate links. If you buy something through one of these links, we may earn an affiliate commission.
Share
Tweet
Share