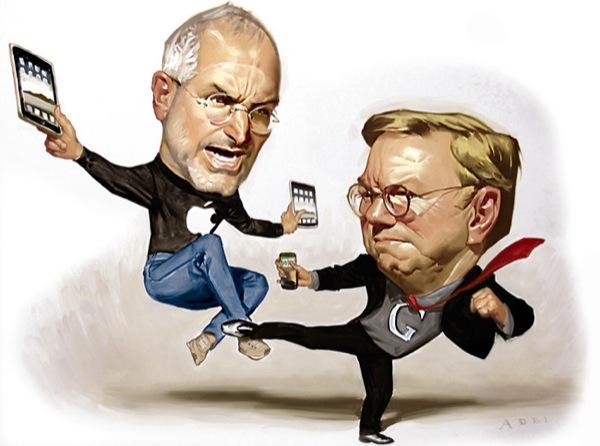 Image Credit: Daniel Adel, New York Times
Nothing sells papers (or ads) like turning a little corporate competition into something personal. Case in point, a New York Times piece from the weekend titled "Apple's Spat With Google Is Getting Personal," that opened with this rather ominous, one-sentence paragraph:

"It looked like the beginning of a beautiful friendship."

Cue the orchestra. The lengthy piece chronicling the relationship between the Silicon Valley titans was formed by two dozen interviews with industry watchers, investors, and current and former employees. It covers a timeline spread that began with Google and Apple working in harmony to prevent Microsoft's domination of online services and mobile devices, and ends with Apple's patent lawsuit against HTC that reeks of a proxy battle against Android and Google. According to the NYT then, the heart of the dispute is betrayal, or Jobs' belief that Schmidt (a former Apple board member) "picked his pocket" by developing cellphones that "physically, technologically and spiritually resembled the iPhone." Here's how one especially feisty encounter is described:

"At one particularly heated meeting in 2008 on Google's campus, Mr. Jobs angrily told Google executives that if they deployed a version of multitouch - the popular iPhone feature that allows users to control their devices with flicks of their fingers - he would sue. Two people briefed on the meeting described it as "fierce" and "heated.""

And that's just the beginning. Read the rest after the break.

The NYT also corroborated an earlier report from Wired detailing the verbal lashing Jobs' gave Google during an internal Apple town hall meeting. You remember, the tirade that had Jobs calling Google's 'Don't be evil' slogan "bullshit." Yeah, that one.

Adding to the battling egos is, Tim Bray, the architect behind XML, who wrote a blog post yesterday announcing his new role as evangelist to software developers for Google's Android platform. He had this to say about competing with Apple:

"The iPhone vision of the mobile Internet's future omits controversy, sex, and freedom, but includes strict limits on who can know what and who can say what. It's a sterile Disney-fied walled garden surrounded by sharp-toothed lawyers. The people who create the apps serve at the landlord's pleasure and fear his anger. I hate it."

"Apple apparently thinks you can have the benefits of the Internet while at the same time controlling what programs can be run and what parts of the stack can be accessed and what developers can say to each other. I think they're wrong and see this job as a chance to help prove it."

The Jobs v. Schmidt meme was then picked up by analysts on CNBC yesterday with Jim Goldman being told by many sources that, "Steve Jobs simply hates Eric Schmidt right now." An anger undoubtedly intensified by Android's dramatic rise in maretshare in recent months. See the frenzied hysterics discussed in the video below.

Our take? Boooring. Let TMZ cover this crap in detail, we're here for the gadgets. We just hope that the rivalry inspires the two to innovate a bit more and litigate a lot less.
In this article: android, apple, eric schmidt, EricSchmidt, fight, google, hate, iphone, jim goldman, JimGoldman, multitouch, steve jobs, SteveJobs, tim bray, TimBray, xml
All products recommended by Engadget are selected by our editorial team, independent of our parent company. Some of our stories include affiliate links. If you buy something through one of these links, we may earn an affiliate commission.
Share
Tweet
Share