T. Stevens
March 17th, 2010
In this article: 600, 650, feature, featured, features, harmony, harmony 600, harmony 650, Harmony600, Harmony650, logitech, logitech harmony 600, logitech harmony 650, LogitechHarmony600, LogitechHarmony650, remote, remote control, RemoteControl, review
Fewer products are more appropriately named than the Logitech Harmony series of smart remotes. They do wonderful things to take home entertainment systems, comprised of a disparate jumble of mismatched devices, and turn them into peaceful entities that work together for the betterment of your living room -- you half expect doves with olive branches in their mouths to fly out of the box when you get one. Alas, there are neither birds nor branches included with the company's latest entrants to the series, the 600 and 650 announced two weeks ago, but still they offer the best value amongst the current Harmony lineup. Can they broker successful negotiations amongst all your devices? Read on to find out.
%Gallery-88275%
Logitech 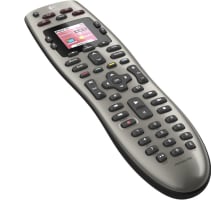 The current generation of Harmony remotes was more or less ushered in by the Harmony One back in early 2008, fitting in toward the higher end of the product line (but below the big-screen Harmony 1100) by offering a touchscreen and rechargeable batteries. Its form factor was subtly evolved and simplified to form the Harmony 700 last year, which ditched the touchscreen and revised the button layout slightly.

Here we have the 650, the next evolution downward in price. Available for $99 (or $79 if you can do with the monochrome screened 600) the 650 looks almost exactly like the 700, but lacks the circuitry for recharging batteries internally and, curiously, has been limited to control just five devices. That's only one less than the 700, but in our case it was one too few, meaning our soon-to-be collectors item HD-DVD player was feeling left out during this testing.

The button layout, stolen from the 700, falls to hand very naturally and leaves us with easy to find volume and channel rockers, plus the play/pause button in the lower-middle feels quite intuitive too. It's also worth noting that the buttons here feel far more solid and springy than those in the older models -- like our 520, which has a few unresponsive buttons after a little over a year of use. Dedicated activity buttons up top are handy, up and down arrows make for easy paging through DVR menus, and the row of colored buttons is great for everything from console game controls to those A, B, and C buttons on Scientific Atlanta DVR remotes. Unfortunately, though, unlike the 700 the buttons themselves aren't different colored, they just have labels on them, and we had a real hard time telling them apart in the dark.

The device is backlit, though, and has a simple accelerometer that will pop on the lights when you pick it up. However, it's a little less sensitive than we've seen in previous remotes, occasionally requiring a shake to come to life. When it does the buttons and the color screen light up, though that lighting is somewhat dim. We also weren't too impressed by the LCD, which has very limited viewing angles. That's picking nits, though -- it's not like you'll be watching Avatar on there.

Setting up and configuring the 650 is just as easy or frustrating as the previous ones, relying on the same online software suite that offers a combination of wizard-like questionnaires and dizzying arrays of menu options. Setting up the 650 will take some time, but the software is comprehensive and, like the other models, this one can learn commands -- leaving us to wonder if there wouldn't be a way to sneak that woebegone Toshiba player on there after all. You can import your settings from another remote, but the Logitech software will no longer recognize that other model when you do. To avoid losing all our settings on our older 520 we had to create a new account and start from scratch.

There's not much to dislike about the 650. It offers most of the features of the higher-end Harmony models but at a more approachable price. The only thing we really don't like is the curious five device cap. Other than giving the 700 a reason to exist we're not sure why the limit was made one lower here, but for many users five will be plenty, and if that's you then you could do a lot worse than picking up a 650 -- or a 600. We'd save $20 and go with the monochrome model, but if you have the means there's nothing wrong with spending a little more to add some extra color to your life.
All products recommended by Engadget are selected by our editorial team, independent of our parent company. Some of our stories include affiliate links. If you buy something through one of these links, we may earn an affiliate commission.