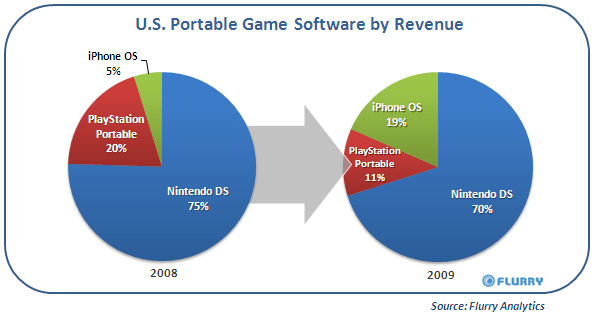 Apple's intentions to dominate handheld gaming were already pretty clear back in March of 2008 as game studio after game studio lined up behind the iPhone (and iPod touch by extension). Now look at the graphics above. Yeah, based on the report from Flurry Analytics, Apple's casual gaming approach is carving out a nice slice of the US revenue pie related to gaming software. The PSP was hit especially hard dropping from a 20% share in 2008 to just 11% of US revenue last year. Numbers that highlight just how ridiculous John Koller's spin maneuver was after the iPad launch. Speaking of which, you have to wonder how these numbers might be affected once developers have a chance to spread out on the iPad, looming Nintendo 3DS or not. Especially with early data showing robust pre-sales and games accounting for almost half of the iPad apps being tested. See that chart after the break. Mmm, pie.

In this article: apple, ds, flurry, Flurry Analytics, FlurryAnalytics, gaming, handheld gaming, HandheldGaming, ipad, nintendo, psp, revenue, revenue share, RevenueShare, software, software revenue, SoftwareRevenue, sony
All products recommended by Engadget are selected by our editorial team, independent of our parent company. Some of our stories include affiliate links. If you buy something through one of these links, we may earn an affiliate commission.
Share
Tweet
Share