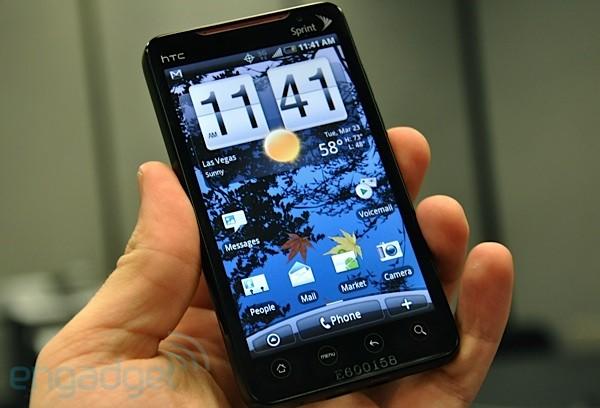 We've been rumoring a WiMAX "HTC Supersonic" for a while now, and Sprint just dropped the hard news: the phone will be dubbed the HTC EVO 4G, will be released this Summer and it's easily the best specced phone we've ever witnessed. The hardware is of quite obvious HD2 descent, but with Android onboard and some nice aesthetic tweaks, the EVO 4G takes on a life of its own. The handset is centered around a 480 x 800 4.3-inch TFT LCD, with a Snapdragon QSD8650 1GHz processor under the hood (the CDMA version of the QSD8250 in the HD2 and Nexus One), and even a helpful 1GB of built-in memory and 512MB of RAM -- hello app storage! Even the battery is bigger than the HD2, and the camera is an 8 megapixel monstrosity with flash, that's capable of 720p video, and is augmented by a 1.3 megapixel front facing camera for good measure. The phone features HDMI out (though you'll need an adapter for turning it into a TV-familiar HDMI plug), 802.11b/g WiFi, and an 8GB microSD card. There's that still-rare Android 2.1 underneath an updated version of HTC's Sense UI. But... despite all these wild features, what actually sets the EVO 4G apart is the fact that it's Sprint's first 4G phone. The handset runs a combo of EV-DO Rev. A and WiMAX, with calls still being made over CDMA and the EV-DO / WiMAX options for data. Interestingly, it sounds like concurrent data and voice use might be possible for the first time on CDMA carrier in this way (killing AT&T's well-advertised differentiator), though Sprint says that's still in the testing phase. One other new feature is the Sprint hotspot app, another MiFi-style connection sharing number, which is obviously aided greatly by the WiMAX on board and can support up to eight concurrent users. Follow after the break for our hands-on impressions and videos of the phone in action, including an up-close-and-personal test of the touchscreen keyboard. Below you'll find galleries of the phone by its lonesome and up against the Nexus One and iPhone 3G.

Update: We've got a graph comparing the Nexus One and Droid with the EVO spec for spec, and there's also a pictorial shootout with the Desire and HD2. Pick your comparo poison! 
We got to play with the phone for an all-too-brief matter of minutes, but everything we saw was frankly breathtaking. The camera does seem to be indeed of a high quality (though we'll still be holding on to our compact shooter, thank you very much), the screen is naturally gorgeous, and the Sense UI was as responsive as we've seen it, and frankly delicious at this jumbo size. The capacitive face buttons are flat and almost a little difficult to see due the thin chrome icons, but the physical buttons (a volume rocker and a power button up top) are very large, tactile and friendly. Around back there's strong, chrome kick stand, and when you pop off the cover the battery is surrounded by beautiful "Ferrari red" plastic. The touchscreen keyboard is positively ginormous, though we're not sure we're feeling some of the recent things that have been crammed in there like huge cursor buttons and the voice recognition button -- just because you can fit stuff in there doesn't mean you should, and they look a little comical at this size. In our testing we weren't really able to get a feel for the browsing speed on WiMAX, but at this point we're primarily enthused that it's even an option, and obviously the theoretical speeds are far beyond 3G, with a bunch of new markets due to go online this year. Battery life is stated as "comparable."

Our biggest questions at this point are availability and pricing. Sprint is keeping mum, just stating a "Summer" availability, and interestingly clarified that not only is it not announcing device pricing, but it's not announcing plan pricing yet either -- sounds like a 4G-on-a-phone surcharge could be somewhere in our future.

In this article: breaking news, BreakingNews, ctia, ctia 2010, Ctia2010, evo, evo 4g, Evo4g, hands-on, hd2, htc, htc evo 4g, htc hd2, htc supersonic, HtcEvo4g, HtcHd2, HtcSupersonic, sprint, supersonic, wimax
All products recommended by Engadget are selected by our editorial team, independent of our parent company. Some of our stories include affiliate links. If you buy something through one of these links, we may earn an affiliate commission.
Share
Tweet
Share