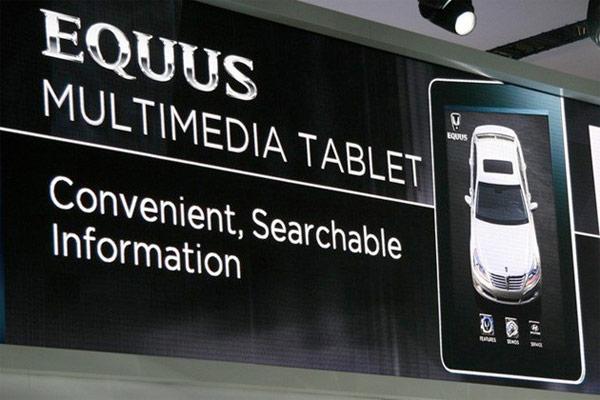 It's certainly not the first time we've heard of an automobile shipping sans a paper-based user guide, but unlike those other guys who toss you a CD-R with a couple of PDFs on there, Hyundai is seriously upping the ante with its 2011 Equus. Revealed today over at the New York Auto Show, the company announced that the aforementioned vehicle would ship with an Equus Multimedia Tablet, enabling users to easily and quickly pull up a slew of information and diagrams about their new whip. The outfit's US president John Krafcik didn't specifically mention the brand or model of the tablet that'd be included, but the image shown to the crowd (and to you, above) certainly reeks of iPad. What's even more interesting is that the tablet will be used as more than just an owner's guide, but as an interface for handling "customer / dealer interactions like scheduling service appointments." We suspect we'll hear more about what kind of device will be included as the vehicle's ship date nears, but if we were the betting kind, we'd say that a massive, undercover deal with Fusion Garage will put a JooJoo into each and every Equus owner's hands. Kidding.
In this article: 2011, apple, apple ipad, AppleIpad, automobile, equus, hyundai, hyundai equus, HyundaiEquus, ipad, sonata, tablet, tablet pc, TabletPc
All products recommended by Engadget are selected by our editorial team, independent of our parent company. Some of our stories include affiliate links. If you buy something through one of these links, we may earn an affiliate commission.
Share
Tweet
Share