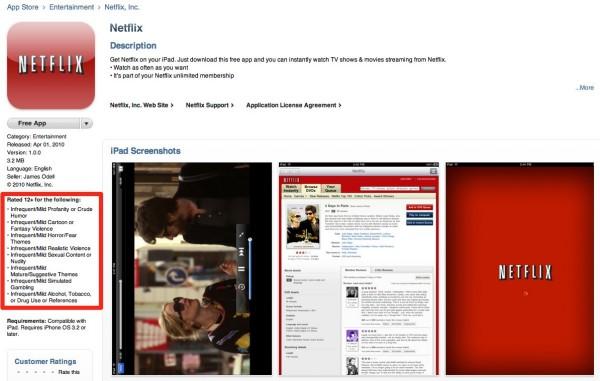 We'd gotten wind of the Netflix iPad app earlier this morning, but when it wasn't included in the first batch of apps to hit the App Store we just assumed it was coming on Saturday -- or possibly even later. But fear not, movie fans: it's just gone live, complete with screenshot confirmation that it'll do streaming video. That's a huge win for Apple and the iPad, given the restrictions on mobile devices Netflix has traditionally operated under -- remember, Microsoft was only allowed to say the Windows Phone 7 Series Netflix app was a "prototype" when it was demoed at MIX. We're guessing the blurry line between the iPad and regular laptops / netbooks worked in Netflix's favor here, but that's just a semantic debate -- we're much more amused by the fact that the app itself is rated 12+ in the App Store for "Simulated Gambling," "Fantasy Violence," and "Suggestive Themes," simply because it plays back movies from your queue that might have such scandalous content. Oh, App Store -- you truly are a paradise of misapplied bureaucratic intent unequaled in the tragic history of our civilization.

Update: Looks like the ABC Player (opens iTunes) is now also available in the app store for the low, low price of nada.
In this article: app store, apple, AppStore, ipad, ipad app, IpadApp, netflix, netflix app, NetflixApp, streaming
All products recommended by Engadget are selected by our editorial team, independent of our parent company. Some of our stories include affiliate links. If you buy something through one of these links, we may earn an affiliate commission.
Share
Tweet
Share