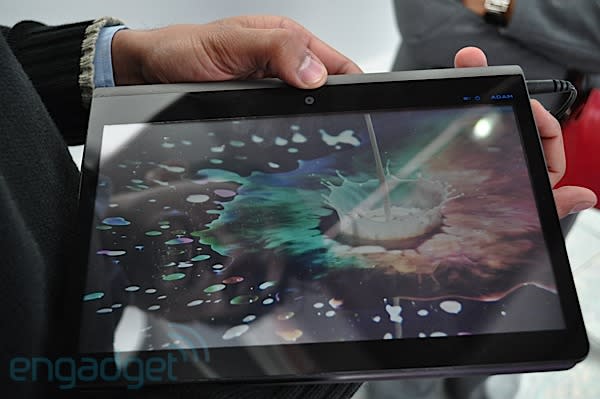 We bumped into NVIDIA at CTIA in Vegas last week, and even NVIDIA itself expressed some frustration at not having any finished Tegra 2-powered products to show us, but there was no talk of delays -- not that we really have many hard dates for any of the Tegra 2 devices to push up against. This morning, however, SlashGear ran a rumor from a "trusted source" saying that there were hardware and software "technical problems" with the platform, including a problem with Flash, which were delaying various tablets, including products from Notion Ink, Compal, and ICD. The source said that the Compal, which was due for a June release, has been bumped to September, while the ICD tablets won't hit until October. We asked NVIDIA for a statement, and they said that "The rumors aren't true. Everything's on track." With that sort of terse reply, we're not really sure which aspects of this rumor NVIDIA is rebutting, but we have to assume NVIDIA is at least saying that there aren't issues with Tegra 2 that are holding things back. As for when we'll see Tegra 2 tablets and smartbooks hit the market? That's anyone's guess.
In this article: compal, delay, icd, notion ink, NotionInk, nvidia, rumor, tablet, tablets, tegra, tegra 2, Tegra2
All products recommended by Engadget are selected by our editorial team, independent of our parent company. Some of our stories include affiliate links. If you buy something through one of these links, we may earn an affiliate commission.
Share
Tweet
Share