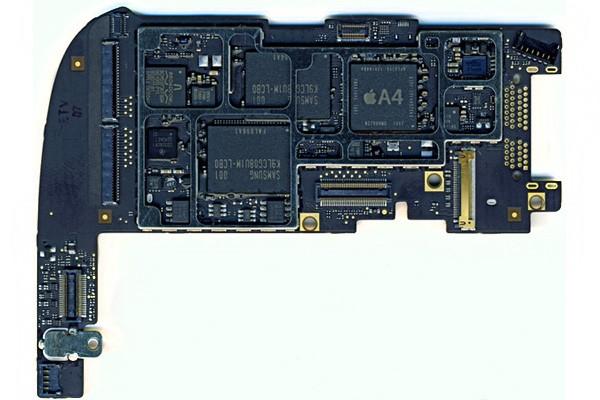 Ever so gently, we're starting to peel away the layers of mystery surrounding the A4 system-on-chip that powers Apple's fancy new slate device. iFixit, helped by reverse engineering firm Chipworks, have gone to the trouble of both dissecting and X-raying the iPad's central processing hub in their quest to lift the veil of ignorance. Their findings confirmed that the A4 is built using a "package on package" method, meaning that the 256MB of Samsung-provided SDRAM is stacked immediately atop the CPU, which is noted as being reductive to both latency and energy use. With a single core processor inside, the iFixit team concluded the iPad had to be running on a Cortex A8 -- which is very much the likeliest choice at this point -- but their assertion that it couldn't be a Cortex A9 MPCore inside is inaccurate, as those chips also come in single-core options. Either way, it'll be interesting to see how it stacks up against Samsung's Hummingbird chip, which was designed by Intrinsity, the same company Apple is being rumored to have recently acquired. Finally, the visual inspection of the iPad's mobo puts a model number to the already known PowerVR GPU, narrowing it down to the SGX 535, while also naming and picturing a number of other exciting components, such as the always popular capacitive touchscreen controller. Hit the source link below for all the lurid images.
In this article: a4, apple, apple a4, apple ipad, AppleA4, AppleIpad, arm, chipworks, cortex a8, cortex a9, CortexA8, CortexA9, dissection, hardware, ifixit, ipad, package on package, PackageOnPackage, powervr, powervr sgx 535, PowervrSgx535, processor, soc, system-on-chip, teardown, x-ray
All products recommended by Engadget are selected by our editorial team, independent of our parent company. Some of our stories include affiliate links. If you buy something through one of these links, we may earn an affiliate commission.
Share
Tweet
Share