CyanogenMod Installer comes to the Mac in beta form 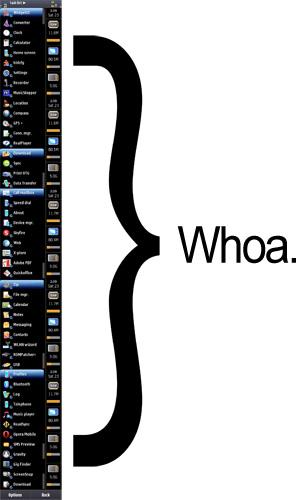 While iPhone 3G owners and would-be Windows Phone 7 buyers sit in the corner, quietly weeping over their lack of true multitasking, webOS and Symbian continue to point and laugh. In mid-January, a Palm Pre Plus was seen cackling with joy over its rivals' misfortune even as the device staggered under the weight of 50 simultaneous applications, and less than a week later, a Samsung Omnia HD performed the very same feat, despite having only half the Pre Plus' RAM (i.e. 256MB) to work with. Now, in what we can only interpret as a large middle finger and "come here" gesture to all who aspire to the cell phone multitasking heavyweight title, we have a video of the i8910 running no less than sixty-two applications thanks to a custom ROM by HyperX. Watch in stunned silence as a finger scrolls through them, right after the break.

In this article: custom ROM, CustomRom, HyperX, i8910, i8910 HD, I8910Hd, multitasking, Omnia HD, OmniaHd, ROM, Samsung, samsung i8910, Samsung i8910 HD, Samsung Omnia HD, SamsungI8910, SamsungI8910Hd, SamsungOmniaHd, simultaneous, Symbian, Symbian S60, Symbian S60 5th, SymbianS60, SymbianS605th
All products recommended by Engadget are selected by our editorial team, independent of our parent company. Some of our stories include affiliate links. If you buy something through one of these links, we may earn an affiliate commission.
Share
Tweet
Share