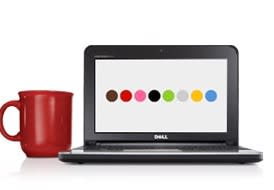 The Dell Mini 10v, choice of netbook hackintosh owners everywhere, has apparently been discontinued as of a week ago. I discovered that today when I couldn't find any on Dell's site, and confirmed it with a live chat with a support representative who told me it was discontinued last week. A message was left for Dell's Media Relations team but was not immediately returned.

Dell's naming system is confusing, so it would be easy to see the "Mini 10" and think that it is available, but the "10v" has a chipset that works with Mac OS X; the regular Mini 10 does not.
Coincidentally, last night I setup my first Dell Mini 10v running Mac OS X. I had my Snow Leopard DVD, the free Netbook Installer application, the instructions from Gizmodo, and an 8GB USB thumb drive; setting this up could not have been any easier. The results are pretty cool, if you are willing to accept the obvious tradeoffs inherent in a netbook.

Today I even ran Software Update, and have the beast running 10.6.3 without a hitch.

As of this writing, there are still a few refurbished models available at Dell's outlet. Although the Mini 10v has been a hackintosher's dream machine, I have no doubt that other computers will come along which prove equally as hackintoshable (I realize that these are made-up words).

Update: A Dell spokesperson tells TUAW that the product was naturally end-of-lifed. Intel launched its Pine Trail Atom processor last year; Dell will be refreshing the mini line with that updated processor. The spokesperson could not clarify the degree to which updated units would be Hackintoshable.

In this article: dell, Dell Mini 10v, DellMini10v, Hackintosh, leopard, snow leopard, SnowLeopard
All products recommended by Engadget are selected by our editorial team, independent of our parent company. Some of our stories include affiliate links. If you buy something through one of these links, we may earn an affiliate commission.
Share
Tweet
Share