Say what you will, but Toshiba has managed to time the Camelio S20 just right -- it was the very same day that our Flip Slide HD frustrations were reaching epic levels, that the $179.99 pocket camcorder showed up on our doorstep. The thin cam, which can shoot full 1080p and capture stills with its 5 megapixel CMOS sensor, just became available in the US earlier this month, and for the price we've actually been blown away by all of the features it boasts in comparison to the competition. So, did the Camelio S20 turn around our pocket cam woes? Jump on past the break for our full review of Tosh's latest camcorder contender. %Gallery-91271%
Toshiba 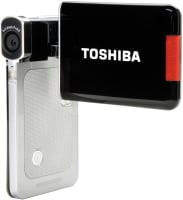 Toshiba is all about touting the S20's thin 17mm (.6-inch) body, and frankly we don't blame them. Immediately after we pulled the .25-pound cam from the box, we were indeed taken aback by just how light it felt. The camcorder was small enough to fit inside a jean pocket as we walked around Boston for the day, though thankfully, it's not a gadget we'd actually want to hide. Sure, it's a bit plasticy, but the glossy black exterior, red adornments and silver bordering give the entire case a nice aesthetic. While we were expecting the skinny cam to be awkward to hold, we generally found it comfortable when shooting with its 3-inch LCD screen extended.

The controls around the cam are where things start to get confusing, and in sum, there are just too many of them. Let's start around the back where you'll find a clickable zoom rocker that also doubles as a menu navigation control, along with record, forward, back, and playback buttons. A plastic cover conceals AV, HDMI and mini-USB ports. On the top are the SD card slot and a macro switch. Oh, we're not done yet: on the opposite side is the picture / video mode control, and when you open the LCD, there's a power and pre-record button. We're not above admitting that we had to open up the user manual to figure out what each of these did in different settings, and we suspect you will as well. Unlike Flip Video cams or Creative Vados, when we handed the S20 over to a friend she was rather befuddled, and needed some assistance simply finding the button to switch to video mode.

For the price, we have to say we may be most impressed with the number of accessories that come in the Camileo S20's box – there's a mini-USB charger, USB / HDMI cables, a mini tripod, a cleaning cloth and pouch. There's also a CD with Arcsoft and Magix Movie Edit Pro 15 PC software. Notable absent is an SD card -- you'll want to make sure you pick one of these up, as the128MB of onboard storage won't get you far. (We should note, however, that Toshiba is offering a 4GB SDHC 8GB SD card for free with the purchase of the $180 S20 on its site right now.)

We'd like to say that the S20's software menus are intuitive and totally make up for all of the complicated controls, but that's not exactly the case. Pressing down on the zoom rocker (yes, it took us a few seconds to figure that out) brings up the somewhat retro-looking interface, and figuring out how to maneuver through the different features with the forward and back buttons is a bit of an IQ test. After some time we were nimble enough to change the video resolution on the fly, but it all is much harder than it should be. There's also the fact that navigating the menus isn't exactly a snappy experience, especially when viewing images or video. When toggling through pictures and videos there's a noticeable lag -- it's not the camera you want to have when all your friends want to "quickly" see how the picture came out.

We know, we know...how's the image and video quality already? The H.264-recording S20 can capture 1080p and 720p video at 30fps, and WVGA / VGA video at 60fps. We shot most of our footage in 720p and found it to be similar in quality, or in some cases slightly better, to that of most pocket cams we've used. In good lighting – whether outdoors or a well-lit room – colors were vibrant and images quite crisp. In low-light situations, like in the aquarium video below, the footage appeared crisper than that shot with a Flip Mino HD, but still a bit washed out. When we turned on the light on the front of the cam in a dark room, we were able to capture a friend's face when we stood within a foot of her, but colors were distorted and the entire video appears a bit grainy (check the sample below). The 4x zoom – which doesn't work in 1080p mode – is more abrupt than we'd like, but we eventually got the hang of smoothly zooming, and turning on the image stabilization mode helped keep closely-zoomed shots more steady. We captured a bit of 1080p video using the S20, but when we hooked up the cam to our HDTV we could just barely tell the difference between the 720 and 1080p footage. It's a nice option to have, but chances are you will shoot in 720p more often because of the zoom option.

We did have a good time trying out a few of the special effects settings, including the slow motion option. You can only record at a lower resolution, but it's still fun to capture a friend in slow-mo without telling them and then embarrass them when you play it back. Yeah, we're cruel like that. There's also a motion sensing setting if you want to set this thing up to see if your cat climbs on your desk when you aren't at home. The S20 only records AVI files, which we found out the hard way when we tried to play back the files in QuickTime on a MacBook. We had no problem viewing the files in VLC, but editing the files will be more hassle-free on a PC.

While we were content with many of the videos we shot with the S20, we can't say the same for all the stills. While outdoor shots were clear and for the most part in focus, many of the indoor stills we captured at the 16-megapixel setting were grainy and aren't the type of shots we'd want to send to share on Flickr. The Macro switch helped for taking better up close pics, but still you're better off with a cheap point and shoot. Feast your eyes on the shots below to see what we are talking about. %Gallery-91333%

Indeed, we have our complaints about the S20's confusing interface and cluttered controls, but when you think about all the features (and accessories!) you get for $150 (on the street, anyway), it's hard to totally pooh-pooh it. Obviously if you are looking for a pocket cam for someone less tech savvy we'd recommend the Flip Mino Ultra HD or Kodak Zi8 HD, and if you want a better performing pocket cam the Xacti VPC-CS1 has a 10x zoom and a less palatable $225 price tag. Ultimately we can't say the S20 cured all of our camcorder woes, but it did turn out to be an HD cam that we can recommend for the price.
All products recommended by Engadget are selected by our editorial team, independent of our parent company. Some of our stories include affiliate links. If you buy something through one of these links, we may earn an affiliate commission.