A really good netvertible -- that's all we want. No, not just a netbook with a touchscreen, but a device with a combination of solid ergonomics and performance in clamshell mode that can swivel into a really responsive tablet. It doesn't seem like too much to ask for, right? And after being disappointed by the Lenovo IdeaPad S10-3t, we really thought the $499 ASUS Eee PC T101MT -- with its multitouch screen, chiclet keyboard, and standard netbook organs -- could have been it. Keyword being could. But, as you may have guessed by now from our wistful tone, there are a few reasons this particular convertible netbook didn't turn out to be all peaches and cream. If you know what's good for you, you'll be hitting that read more link to find out what was this Eee lacking in our full review. %Gallery-91835%
ASUS 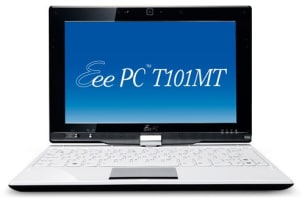 Sadly, the T101MT's design is so last year. No -- seriously, it has the same design as the Eee PC T91 that we reviewed just about 10 months ago. We much prefer the thin and rounded design of the Seashell Eee PCs, but the squarish and chrome accented T101MT does have something professional about it. We got our hands on both the black matte and glossy white versions, though if we had to choose we'd probably go with the latter. As for build quality, the overwhelmingly plastic netbook actually feels sturdier than other ASUS netbooks we've recently reviewed, but it doesn't hold a candle to the HP Mini 5102's aluminum chassis. Thankfully, the convertible hinge isn't too wobbly, either.

Size-wise, the 1.2-inch T101MT is thick, but at 2.8-pounds it's comparable in weight to other netbooks out there. In slate mode, we wouldn't say it was cumbersome to hold it in the crook of our arm, but something about it didn't feel as comfortable as the Lenovo IdeaPad S10-3t. Learning from its mistakes with the T91, ASUS managed to cram three USB ports, an Ethernet, VGA, mic / headphone jacks and an SD card slot around the chassis.

The T101MT has the same matte, chiclet keyboard as the Eee PC 1005PE, which has thankfully done away with the flex that was characteristic of many previous ASUS keyboard panels. Overall, it's fairly comfortable, though the shrunken right Shift key caused us to mistakenly hit some other keys at times. On the other hand, the touchpad is significantly larger than that on the IdeaPad S10-3t, and was comfortable enough for pushing around the on-screen cursor. The multitouch implementation on the pad -- very much unlike that on the display -- is quite responsive, though two-finger scrolling was a bit jittery in some cases. ASUS continues to use a single rocker bar instead of dedicated right and left mouse buttons, so we continue to double tap on the pad to make selections whenever possible.

It's hard to decide if it's the T101MT's poor touchscreen or ASUS' terrible software choice which make the tablet experience so incredibly frustrating -- and that's really putting it mildly. While we were extremely happy to see ASUS use a matte, 1024 x 600-resolution 10.1-inch display -- rather than a glossy one like that on the IdeaPad S10-3t -- the quality didn't live up to our hopes. We attribute the extremely washed out colors to the touch layer, but the viewing angles are also quite narrow – colors were quick to fade to black when we held the tablet off axis, and we found it harder to make out text when trying to read at different angles while lying on a couch. To make the obvious iPad comparison, Apple's IPS screen is light years ahead in quality.

For a resistive panel, the touchscreen is actually quite responsive, though unsurprisingly requires a firmer press to make selections. But since we have become so accustomed to using capacitive tablets we had to get the hang of having to really give icons a firm press or use a fingernail to maneuver through menus. Multitouch gestures are just not as smooth as they should be – there's just something unnatural about having to firmly press two fingers down on the screen to scroll. The stylus, which pops out of the right side of the screen, was pretty much our best friend given the display frustrations and the lack of finger-friendly software. ASUS' included PenWrite software is supposed to optimize the finger touch experience, but we didn't really notice much of a difference when using the utility.

And this brings us to the "uh, we just don't get it" question: why in the world would ASUS ship a $499 multitouch-capable tablet with an operating system that doesn't support multitouch or even have integrated touch capabilities? That's right, the T101MT ships with Windows 7 Starter, which -- regardless of not supporting pinch-to-zoom or two-finger scrolling gestures -- doesn't include handwriting recognition or an onscreen keyboard. The company does make up for the latter concern by including SoftStylus' keyboard, but you have to manually bring it up anytime you want to input text (i.e. into the address bar), and the handwriting recognition is quite sluggish. It's for those reasons that we spent most of our time with the netbook in clamshell mode. When we did flip it into tablet mode, the stylus didn't leave our hand since the OS doesn't let you drag a finger up or down the screen to scroll or flick to move through pages. Even though ASUS does include its TouchGate software layer, it's really just enlarged shortcuts -- if we had to pick the "killer touch app," it'd be the big-buttoned calculator. Yeah, it just isn't a good situation.

To say the netvertible with Windows 7 Starter is lousy is an understatement, but how is it when you upgrade it yourself to Windows 7 Home Premium? (Note: it's a $49 upgrade from Starter to Home Premium.) Sure, it's better, but the resistive touchscreen still makes things easier with the stylus. When we surfed the web in slate mode we preferred to input URLs with the pen on the virtual keyboard, and as we mentioned before, two-finger scrolling required a firm press and was ever-so-janky. We do see the touchscreen being helpful to those that want to take notes – it was a bit slow, but our handwriting was accurately converted to text in Microsoft Word. The T101MT doesn't have an accelerometer, so you have to rotate the screen by holding down the button on the bottom bezel – we'd actually be okay with that if we didn't have to wait five seconds every time we wanted to rotate the screen.

At least there's better news when it comes to the handling the typical netbook stuff. The T101MT's 1.66GHz Intel Atom N450 processor and 1GB of memory provided adequate performance when we simultaneously wrote this review in Microsoft Word, listened to Slacker in Firefox and checked our Twitter feed in TweetDeck. While we did notice that it was sluggish to open TouchGate, we're more inclined to blame the software for that. ASUS has swapped out the flash storage that was in the T91 for a 160GB, 5400rpm hard drive. As per usual, the Intel GMA graphics set was fine for watching some YouTube and Hulu clips, but attempting anything HD resulted in severe stuttering.

The T101MT's four-cell, 35Wh battery lasted four hours and 13 minutes on our video rundown test with brightness set to 65 percent. That's actually not too bad for a netbook with a flush battery, and in real usage it lasted a bit closer to five hours. The battery oddly ejects from the bottom-front of the system so even if you do pick up an extra it wouldn't be higher capacity. Like other ASUS laptops we've recently reviewed, the T101MT comes with a cluttered desktop – we could really do without all of the ASUS utilities and eBay / Boingo deleteware. You can also head into ASUS' ExpressGate Instant-On OS before booting up Windows, but in all honesty we never really spend much time in those pre-boot environments.

What can we say? We wanted the Eee PC T101MT to be that perfect tablet / netbook mutt. But for $499, we simply cannot recommend it. Sure, you can upgrade to Windows Home Premium for a bit more cash, but at that point you're spending $550 and still getting a pretty shoddy touchscreen experience. While the Lenovo IdeaPad S10-3t has a better capacitive screen, we found its performance and viewing angles to be pretty unpleasant. We wish we had better news, but we're still in a place where we can't say there's a well-rounded netvertible out there. And for that, our search continues...
All products recommended by Engadget are selected by our editorial team, independent of our parent company. Some of our stories include affiliate links. If you buy something through one of these links, we may earn an affiliate commission.