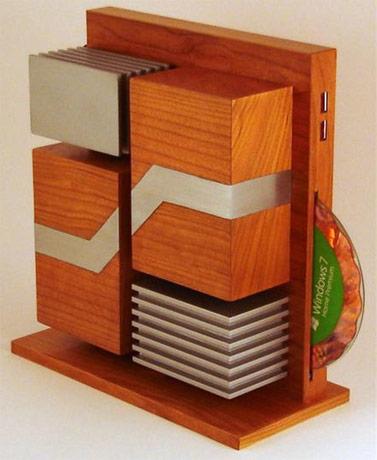 Let's face it -- if you had a never-ending stack of cash and a computer room with no particular size constraints, you too would own a Thermaltake Level 10 enclosure. Regrettably, both financial and square footage constraints do indeed play major roles in most of our lives, including one Jeffrey Stephenson. This fine gentleman is quickly becoming the Ben Heck of wood-grained mods, this time cranking out a lovingly crafted iteration of the aforesaid chassis, but with that special wooden flair. The Level Eleven gets its inspiration from the gargantuan Level 10, but rather than taking things even bigger, Jeff decided to scale things down a notch; in fact, he constructed a fully functional PC within the handmade enclosure, all based around a VIA Pico-ITX mainboard and a 1.2GHz VIA Nano CPU. Thanks to the onboard VX855 media processor, this (comparatively) diminutive machine boasts an HDMI output and enough horsepower to pump out 1080p sans lag -- but it doesn't seem as if this bad boy is officially for sale. Not that he'd reject a five-figure offer or anything...
In this article: case, chassis, desktop, diy, enclosure, htpc, Jeffrey Stephenson, JeffreyStephenson, level 10, Level Eleven, level ten, Level10, LevelEleven, LevelTen, mod, pc, pc case, PcCase, pico-itx, thermaltake, via, VIA P820, ViaP820, wood, wooden
All products recommended by Engadget are selected by our editorial team, independent of our parent company. Some of our stories include affiliate links. If you buy something through one of these links, we may earn an affiliate commission.
Share
Tweet
Share