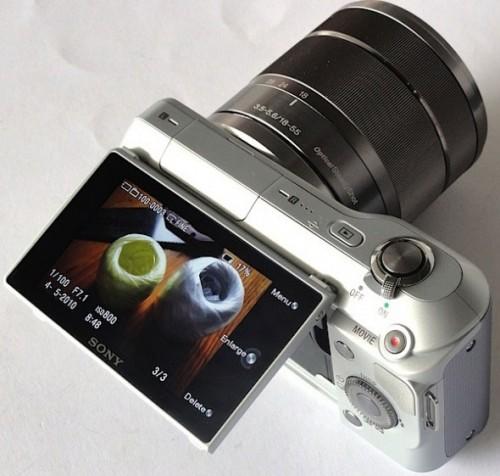 It looks like Sony's having a field day right now in Japan, making its official reveal of the NEX3 and NEX5 cameras, the "ultra-compact" DSLRs with interchangeable lenses we saw back at PMA. The presentation is going on as we speak, and the rumor sites seem to suggest Digital Photography School posted (and subsequently pulled) a review of the NEX3. Quesabesde, however, still has its preview of the not-quite-Micro Four Thirds shooters live, and is also listing some specs and prices. First with the technical details: the NEX3 has a 14.2 megapixel sensor, support for Memory Stick and SDXC media, 720p / 30fps video, and an articulating 2.95-inch LCD. The NEX5 boasts AVCHD 1080i video, and we're not sure yet as to other differences between the pair. As for pricing, the bodies on their lonesome appear to be worth about €250 and €350, respectively -- that's $320 and $448 in US currency. Throw in a 16mm f2.8 lens for €250 and you're now looking at a minimum of €500 (or $640) to join the fray. The kits are said to be going on sale in June. Sony's official site hasn't updated yet, but with any luck we'll get the legit scoop in very short time.

Update: Sony made it official, says a firmware update will be released this summer to capture stereoscopic 3D sweep panoramas.