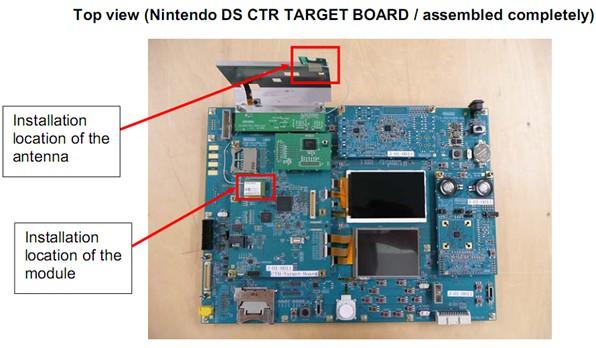 It looks like Nintendo may have managed to run an early prototype of its upcoming 3D handheld, the 3DS, through the FCC without anyone noticing -- well, for a few weeks, anyway. The filing was made available on April 30 and Wireless Goodness spotted it, posting the image above showing what looks more like an ATX motherboard than a handheld gaming platform. But, what wasn't noticed at the time was the aspect ratio of the top screen (in the middle of the circuitry): it's 16:9, while most every other Nintendo handheld to date has of course been 4:3. That aspect ratio matches the 3.4-inch parallax barrier display from Sharp, the one that just about everyone is expecting will be featured in the device. Connecting the dots, this could be a prototype 3DS in the flesh, dubbed the "CTR." Given that Nintendo called the DSi the "TWL" the XL the "UTL," even the naming scheme fits in. Sadly the FCC images have since been pulled, but we look forward to seeing a rather more petite version of the thing at E3 next month.
In this article: 3ds, ctr, fcc, handheld, nintendo, nintendo 3ds, nintendo ctr, Nintendo3ds, NintendoCtr, parallax barrier, ParallaxBarrier, prototype, sharp
All products recommended by Engadget are selected by our editorial team, independent of our parent company. Some of our stories include affiliate links. If you buy something through one of these links, we may earn an affiliate commission.
Share
Tweet
Share