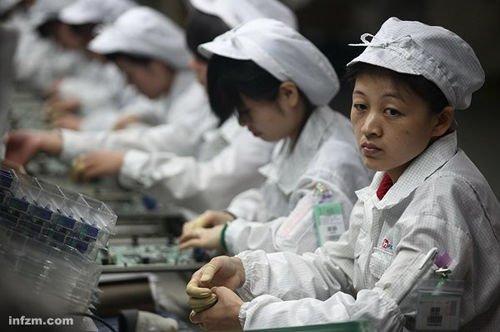 Machine translations are still years or even decades away from perfection, so rather than sending you to an auto-translated page, we now present -- with exclusive permission from Southern Weekend -- a human translation of this damning article on Foxconn by undercover reporter Liu Zhiyi.
(Photo: Southern Weekend)
I know of two groups of young people.

One group consists of university students like myself, who live in ivory towers and kept company by libraries and lake views. The other group works alongside steel machineries and large containers, all inside a factory of high-precision manufacturing environment. These guys always address their seniors as "laoban" (boss), and call their own colleagues -- regardless of familiarity -- the rude "diaomao" (pubic hair) in loud.

After going undercover in Foxconn for 28 days, I came back out. I've been trying to tie the two pictures together. But it's very difficult. Even with people living in these two places sharing the same age, the same youth dream.

My undercover was part of Southern Weekend's investigation on the then six Foxconn suicides. We soon found out that most of Southern Weekend's reporters were rejected due to age -- Foxconn only recruits people around the age of 20. In comparison, being just under 23 years old, I was quickly brought into Foxconn.

The 28-day undercover work made a strong impact on me. It wasn't about finding out what they died for, but rather to learn how they lived.

Their most sumptuous day is the 10th each month -- pay day. That day, all the ATMs and themed restaurants are packed with long lines, and consequently the ATMs are often drawn empty. The salary's made up of the ¥900 ($132) local minimum wage and the variable overtime pay.

Each employee would sign a "voluntary overtime affidavit," in order to waive the 36-hour legal limit on your monthly overtime hours. This isn't a bad thing, though, as many workers think that only factories that offer more overtime are "good factories," because "without overtime, you can hardly make a living." For the workers desperate for making money, overtime is like "a pain that can breathe:" without it, the days without money make them "suffocate;" with it, the restless work would only add more "pain" to the body, thus aging quicker. Most of the time they staunchly choose the latter, but even the right to choose such isn't available to all. Only those with the seniors' "trust," with good connections, or those in key positions, can often get to work overtime.

So, the "May 1st" [Labour Day] festival is a concern for some, because it's "hard to boil through" the days when you spend money without making any. That day, workers would rather not celebrate any festival, and wish for more overtime pay; the reality is they can't [choose], so might as well just have a lie-in.

In front of a newly-opened phone shop, the sales assistant flashed an iPhone to the Foxconn employees, with everyone focused on his every "cool" gesture, as if it was something new. But actually, Foxconn's manufacturing covers almost every well-known brands' gadgets, including the iPhone and the iPad, so every part of this "new" device would've come from the hands of these workers, except these guys had never thought of owning the final product. And now, this whole thing is right in front of their eyes with a "smashing price of ¥2,198 ($322)" -- just above their monthly pay. This is an expensive device, so instead they discussed how to spend some hundred yuan on a shanzhai handset.

When chatting with them, I often struggled to respond, as I felt I was ridiculously fortunate. They actually envied those who could take a leave due to work injury, while casually joking about how their station's been toxicated. When talking about their colleagues' suicidal jumps, there was often a surprisingly calm reaction, and sometimes even a banter would be made about it, as if they were all outsiders.

I'm happy to see them as a bunch of optimistic and determined people, and I wish they really had nothing to do with these [suicides]. But whatever way you look at this, it's inevitably sad. I even imagine possessing a power that can change everything, but this is like Wang Kezhu saying "I wish someone could give him [sic] a kick for a five minute break" during our night shift -- so naïve, and it's never going to happen.

If you ask the workers what their dream is, you'll often get the same answer: start a business, make money, get rich, and then you can do whatever you want. In the warehouse, they humorously name their hydraulic trolleys "BMWs." They, of course, would rather own actual BMWs, or at least "BMW" kind of wealth.

They often dream, but also repeatedly tearing apart their dreams, like a miserable painter who keeps tearing up his or her drafts, "if we keep working like this, we might as well quit dreaming for the rest of our lives." They manufacture the world's top electronic products, yet gathering their own fortune at the slowest possible pace. The office's guest network account has a password that ends with "888" -- like many businessmen, they love this number, and they worship its phonetic equivalence ["rich"]. Little did they know that it's their own hands protecting the country's "8," yet their overtime hours, lottery tickets, and even horse racing bets, struggle to find the "8" that belongs to themselves.

The hard-working Wang Kezhu moaned that the salary was too low, but when he tried to apply for courses outside he "couldn't understand a word," so he gave up. He said without much knowledge, he could only get whatever job that came first, and that this was fate. Sometimes he'd say he's got a big headache, but would quickly become alive again. When pulling trolleys he'd often run, as if the 24 boxes of goods weigh sod all. Every day he'd climb up two to three-meter tall box stacks to check inventory, and would squeeze into small gaps to check the labels. I asked him why push so hard, but he never answered, until one morning I saw him stopping in front of a pillar, and suddenly shouted "help!" He probably didn't know what he'd just blurted out, either, but I heard the real souls. They're used to putting in so much effort to make a change, until that effort became a struggle, and that they weren't even sure if they had the power to break through the cocoon.

In the factory area, those neatly planned tall buildings had nothing special apart from their alphanumeric codes on the top. The machines, boxes and even the uniformed workers inside all bear the same pattern. One morning, on my way to work I saw two heads poking out of the buildings, just gazing at the pedestrians. Too far away, couldn't see their expressions, nor could I hear them, just two black dots at the window. If stood in their positions, the road's no doubt just full of moving black dots, so insignificant in comparison to the large white buildings.

This factory's workers rule the world's finest gadgets' assembly lines with their two hands, and continuously break trading records that buzz the world, holding the Chinese export champion title for seven years non-stop. But it seems like while they're controlling the machines, the machines also have them dominated: the parts gradually come together as they move up the assembly line; at the same time, the workers' pure and only youth also disappear into the rhythmic machineries.

After using the toilet at 4am, I stuck my ear on the workshop corridor wall, and listened to the machines rumbling steadily from all four directions -- this is the factory's heartbeat. The employees work, walk and eat at this beat, so no wonder I was walking so fast, eating so quickly without anyone hurrying me, even though it didn't feel good. You're like a component that's entered the assembly line, just following the rhythm, belonging to that heartbeat at 4am, no way to escape.

Shenzhen, a once small border town that leaped to one of Pearl River Delta's busiest cities, hides a group of anxious young people behind row upon row of tall buildings. In 2009, Times magazine nominated "The Chinese Worker" as "Person of the Year," praising its "determined vision shone on the future of mankind,"* but this so-called "determination" is needed to resist being mechanized and eroded by capitalism. Can they really avoid such "determination?" When computers, phones, cars, and all other commercial products become the products of capitalism, sweat, youth, and even life, all these values are exhausted by capitalism as well.

This super factory that holds some 400,000 people isn't the "sweatshop" that most would imagine. It provides accommodation that reaches the scale of a medium-sized town, all smooth and orderly. Compared to others, the facilities here are well-equipped and superior, with employee treatment meeting standard specifications. Thousands of people flock here each day just to find a place of their own, to find a dream that they'll probably never realize.

This isn't a factory's inside story, but the fate of a generation of workers.

(As requested by the interviewee, he's given "Wang Kezhu" as his alias in this article.)


*The actual quote in the classic edition of Time is rather different, so we'll assume this was taken from the Chinese edition.

Update: Commenter SeeKo just dropped in links for a three-part Chinese TV news segment on the Foxconn incidents, all close-captioned.

In this article: china, covert, death, exclusive, foxconn, hon hai, HonHai, investigation, shenzhen, southern weekend, SouthernWeekend, suicide, suicides, undercover, video, welfare
All products recommended by Engadget are selected by our editorial team, independent of our parent company. Some of our stories include affiliate links. If you buy something through one of these links, we may earn an affiliate commission.
Share
Tweet
Share