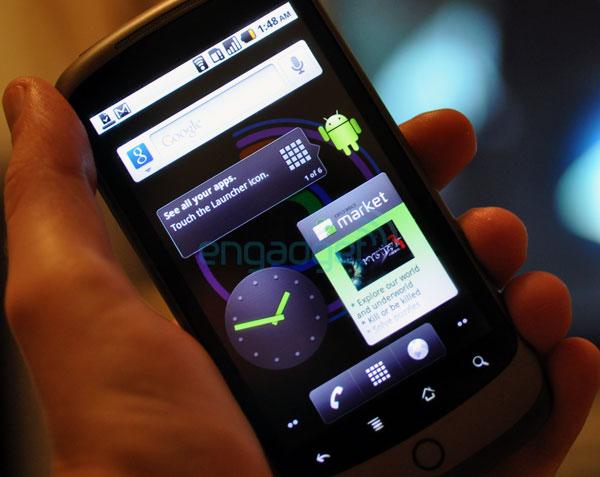 Much to our surprise at the time, when Adobe sent us a Flash 10.1-enabled Nexus One for testing, the phone came preloaded with a preview build of Android 2.2 -- a.k.a. "Froyo" -- the apparent turning point for curbing Android fragmentation due for a very public unveiling today at Google I/O. We've had a day or two to dig into it, and while we're surely missing some improvements here or there (Google was unable to provide us a changelog as of this writing), we've spent pretty much all our waking moments combing through every virtual nook and cranny. So what can Eclair alumni expect from the revised platform? Read on for more! The first thing you'll notice with Froyo is a slightly modified navigation bar that assimilates shortcuts for both the phone and web browser. The Google search bar has undergone a slight modification, too, letting you cater your search specifically to web, apps, or contacts -- and that's about it for home screen modifications. No extra wallpapers, no additional screens, no new shortcuts. As for new widgets, all we've seen are a tutorial box and a rotating ad for featured marketplace apps.

Well, what do you know? Even seeing the settings sub-menu for tethering and portable WiFi hotspot functionality didn't completely convince us, but sure enough, we logged on to AT&T's 3G network without any issues. Security options are limited at this point -- it's WPA2 PSK or bust -- but that should be more than enough when your DSL goes on the fritz or you're stuck in traffic and need to do some heavy emailing. Let's see how long the carriers turn a blind eye on this one.

Top row: Froyo (first with HQ enabled, then without; bottom row: Eclair (same settings on both screens)
The only other stock widget, aside from Google search, that had any noticeable change was YouTube, which now scrolls through a set of most viewed videos to entice and distract you on passing glances. The player itself, however, beams a shiny new "HQ" button on the bottom right of the screen. But before you go gloating to your EVO 4G-carrying pals, you should know that in our tests the higher-res option by and large matched the default (and thus far only) video option for Android 2.1 Eclair, and non-HQ was even more scaled down, and didn't even span the entire width of the 3.7-inch screen. And to think, the sight of that button alone gave us such jubilation. (Update: As a number of readers have pointed out, this change is nothing more than semantics -- the Nexus One does have the same low-quality option buried inside menus.)

While support for apps on external storage is presumably intended for Froyo (the Manage Applications screen is now divided amongst Downloaded, Running, All, and most importantly, "On SD card"), try as we might, we couldn't find a single program that'd let us use the "Move to SD card" functionality. That includes marketplace and third-party downloads -- we'll have to explore this one later.

Some of the other highlights, briefly:

We have to say, it's really something to have a mobile browser that doesn't pop up little cubes with question marks all over the web, but we found that rediscovering Flash was much like reuniting with a high school friend; at first you've so much to catch up on, but then you realize how far you've grown apart. Adobe's pre-vetted list of Flash-enabled sites do a good job of showing off the technology, but we still can't help but think the interactive elements still have a lot of catching up to do. As for video, the stream is good quality but gets fairly choppy -- especially when you check out something "not optimized for mobile viewing." Some of the HTML5 footage we've seen via the same device shows up in crisper detail and fluidity. Battery and heat are also of concern: the pre-release beta we have, according to Adobe, lacks hardware acceleration. Ergo, our beloved handset got piping hot after about 30 minutes of heavy video watching, and the battery indicator in the upper right had a sizable dent. So, does the new system run as silky smooth as earlier hinted at? In our tests, we were getting about the same Linpack scores as the early reports, which was over five times higher on Froyo than on Eclair -- and even more dramatic when you compare it with an Eclair-laden Motorola Droid. We saw similar results with a number of other benchmark tools, namely Sunspider and Benchmark Pi (unfortunately NeoCore, our favorite 3D test, kept crashing when we tried it).
Notes: MFLOPS is millions of floating point operations per second (higher is better). Sunspider tests Javascript performance and Benchmark Pi measures calculations of the irrational number -- lower is better for both. All numbers shown are averaged from five tests apiece.
Of course, numbers are one thing, but how does it feel in practice? Frankly, we haven't seen that dramatic of a performance change. The full Engadget page consistently loaded a few seconds faster on Froyo, as did any other page we tried. Ditto for some of the more hardware-intensive games -- Raging Thunder II, for example. That said, fresh locations on Maps loaded just as fast on both versions, and we were hard pressed to find any other noticeable performance disparity.

It's clear to us that, toying with the OS prior to Google's big unveil, we're not getting the whole picture of Froyo. But taking what we have here so far, there's a lot of promise (and certainly a lot of improvements on the backend). Some of the major aesthetic issues that have plagued Android in the past, however, are still out in full force. There seems to be no cohesive vision on how the platform should look and feel, and first-party apps run the gamut in terms of interface and design. The whizzes at HTC know how to work their magic with Sense UI, but what we'd really like to see is Google come out with an interface that'd prove much less tempting to cover up. Still, the narrative of this Brave New 'Droid is still being written, and this is definitely a step in the right direction.