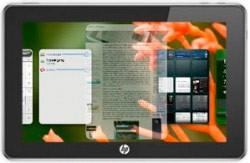 Don't mind us taking a few grains of salt on this one, but according Digitimes, HP Taiwan Vice President Monty Wong has confirmed a webOS-powered tablet is due out in the market before the fiscal year ending in October. This jibes with what we heard earlier this month, including the common sense caveat that more details will be forthcoming only after the Palm acquisition is completed near the end of July. Now, we won't be surprised one iota if this comes to fruition -- HP itself has gone on record numerous times as wanting to throw the onetime mobile-exclusive OS on everything from tablets (yay) to printers (huh). Still, everything we know about it so far comes via words and whispers to third-party sources, or the voice in our head dreaming up ideal product lines -- neither of which, unfortunately, we can put our complete trust in.

Update: The DigiTimes report might be referring to the existing Windows-based Slate for a pre-October launch, not necessarily the first volley of HP-branded webOS devices -- but either way, we're certain the article isn't ruling out the Windows 7-based Slate. See more here.

In this article: digitimes, hp, hp palm, HpPalm, monty wong, MontyWong, october, palm, palm hp, PalmHp, slate, webos, webos slate, webos tablet, WebosSlate, WebosTablet, wong
All products recommended by Engadget are selected by our editorial team, independent of our parent company. Some of our stories include affiliate links. If you buy something through one of these links, we may earn an affiliate commission.
Share
Tweet
Share