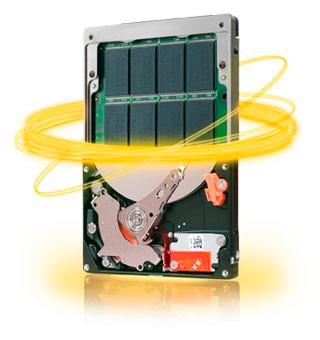 Just as we surmised, Seagate is taking the wraps off its new hybrid drive, with OEM shipments of the Momentus XT starting today. Hailed as the fastest 2.5-inch laptop drive on the planet, this here device marries a 7200RPM hard drive (250/320/500GB) with 4GB of SLC NAND flash memory and 32MB of cache, and the company's Adaptive Memory technology allows it to store frequently used information on the latter for ultra-speedy access. It can boot up to 100 percent faster than a conventional 5400RPM hard drive, and thankfully for us all, it utilizes a standard 9.5mm-high form factor that the vast majority of laptops use. Seagate also affirms that the drive "operates independently of the operating system and the motherboard chipset," but we're going to hold tight until we see the first real benchmarks (it'll soon be an option in ASUS' ROG G73Jh gaming laptop) before getting all hyped up. In related news, the outfit also announced the world's highest capacity 7200RPM drive at 750GB, with the Momentus 750GB boasting SATA 3Gbps support, an NCQ interface, 16MB of cache and "silent acoustics." No price is mentioned, but you can bet a hefty premium will placed on something this capacious. The full presser, another image and a specs sheet awaits you beyond the break.

Update: The reviews are already pouring in, and at just $155 for the 500 gigger, it's receiving a fair amount of praise.

Today's high-performance SSDs for mobile computing cost as much as 10 times more than hard disk drives of the same capacity, with the price of a 250GB SSD outstripping even the cost of many laptop PCs. As a result, most consumers and system builders are unwilling or unable to pay the high price for the greater speed and quiet operations of SSDs. Additionally, SSDs offer fewer capacity options than hard disk drives.

The Momentus XT drive is a best-of-both-worlds solution that combines a 7200RPM spin speed, 4GB of solid state memory and Seagate's Adaptive Memory technology to deliver unprecedented hard drive performance. The unique Adaptive Memory technology works by identifying patterns in how often certain digital data is used, and then moving the most frequently used information to the embedded solid state memory for faster access – effectively tailoring hard drive performance to each user and their applications.

"We see the Momentus® XT drive as a game changer, a product heralding a new generation of hard drives that combine SSD and HDD capabilities so that laptop users don't have to make trade-offs on speed, cost or capacity," said Dave Mosley, Seagate executive vice president of Sales, Marketing and Product Line Management. "The feedback we've received from customers, industry experts and early reviews has been overwhelmingly positive, and Seagate will continue to drive innovation that provides more value and a better computing experience to consumers."

ASUS has also announced that it will offer the Momentus XT drive as an upgrade option for its new Republic of Gamers (ROG) G73Jh notebook. The system is powered by an Intel i7 720Qm quad-core processor, 8GB of DDR3 memory, and DX11 capable ATI Radeon Mobility HD 5870.

The Momentus XT drive installs as easily as a traditional 9.5mm-high notebook drive for new systems or laptop upgrades and, unlike early hybrid drives, operates independently of the operating system and the motherboard chipset.

On Wednesday, May 26, Seagate and OEM customer ASUS will co-sponsor a live webcast unveiling not only the new Momentus XT solid state hybrid drive, but also featuring the new ASUS ROG G73JH system with two Momentus XT drives. Three lucky attendees of this webcast will win a new G73 system just for attending*. Special guest speakers will provide an in-depth look at how this drive will transform high-performance computing.