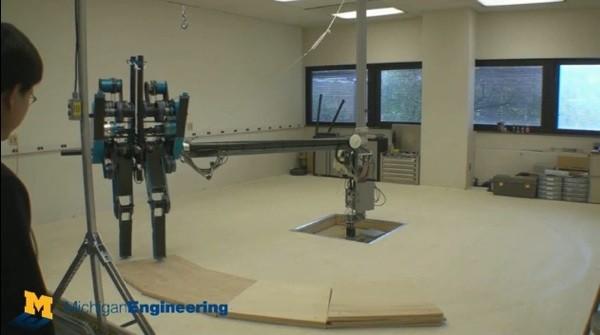 We're going to warn you up front. This isn't easy to watch, but robotics research can sometimes be a nasty business, and some things just can't be left unseen. At the center of the disaster waiting to happen pictured above is MABEL, a bipedal robot that researchers at the University of Michigan have been working on for the past few years, and which, on an otherwise ordinary May 18th, made its first attempt at walking over rough ground. Things got off to a well enough start, with MABEL able to walk with a reasonably natural gait, and even recover after a small slip after a few boards where placed in her path. As the university itself points out, however, the whole point of the experiment was to "push her til she cracked" -- and crack she did, with a shin eventually giving way after one too many boards were added, resulting in one of the sadder sights we've seen in our years of robot watching. Head on past the break for the complete video, if you can handle it.

In this article: biped, biped robot, bipedal, bipedal robot, BipedalRobot, BipedRobot, grizzle, j.w. grizzle, J.w.Grizzle, mabel, research, robot, u-m, university of michigan, UniversityOfMichigan, video
All products recommended by Engadget are selected by our editorial team, independent of our parent company. Some of our stories include affiliate links. If you buy something through one of these links, we may earn an affiliate commission.
Share
Tweet
Share