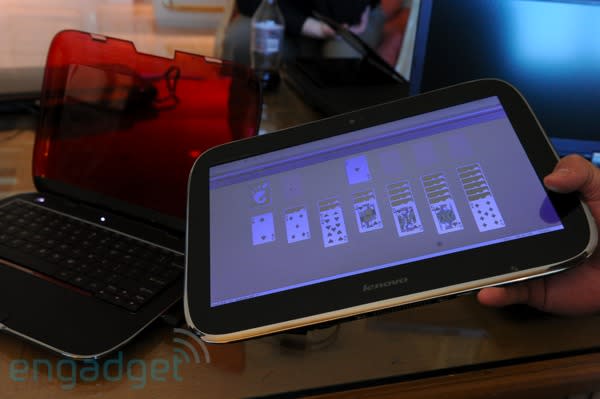 Lenovo's been awfully quiet about the Skylight smartbook and U1 Hybrid tablet / laptop since it first showed them off at CES, and now we know why: following weeks of rumors that the custom Linux-based Skylight OS wasn't up to snuff, the company is killing the project entirely in favor of Android. That makes a lot of sense, considering Lenny's already shipping a Skylight-skinned version of Android on the Snapdragon-based LePhone, but it also means that the Skylight smartbook and U1 demoed to us at CES are done for as well -- Lenovo's statement says the "initial version of the Skylight" is being "shelved" and refers to the U1 as a "concept."

We spoke to Lenovo for clarification and it sounds like things are in considerable flux at the moment: the company told us it wants to tap into Android's apps and ecosystem, but it's invested something like 18-24 months into building Skylight OS products and it's going to rethink and retool while it transitions to Google's OS -- although the underlying ideas of the Skylight and U1 Hybrid will live on in future devices, neither will come to market as announced. We were also told that Lenovo is now targeting Q4 as a launch date for Android-based devices, so we'll see what happens -- it'll be a sad day for the gadget world if the U1 fails to live on in some way.

After careful consideration of market conditions and user feedback, Lenovo has decided to focus its resources on building a family of next-generation mobile internet devices based upon open technologies such as (but not limited to) the Android kernel, similar to the Lenovo smartphone, which is available for sale in China now.

As a result of Lenovo's strategic shift towards open standards such as an Android kernel based environment, the Company has shelved its plans to release the initial version of the Skylight smartbook that featured a proprietary Linux-based OS.

Lenovo remains committed to working with our strategic partners to deliver innovative products in the growing mobile internet space, including the aforementioned smartphones and smartbooks, as well as exploring innovative new concepts that continue to "push-the-envelope" like the U1 hybrid PC.

In this article: laptop, lenovo, lenovo skylight, lenovo u1, lenovo u1 hybrid, LenovoSkylight, LenovoU1, LenovoU1Hybrid, skylight, skylight os, skylight smartbook, SkylightOs, SkylightSmartbook, smartbook, tablet, u1, u1 hybrid, U1Hybrid
All products recommended by Engadget are selected by our editorial team, independent of our parent company. Some of our stories include affiliate links. If you buy something through one of these links, we may earn an affiliate commission.
Share
Tweet
Share