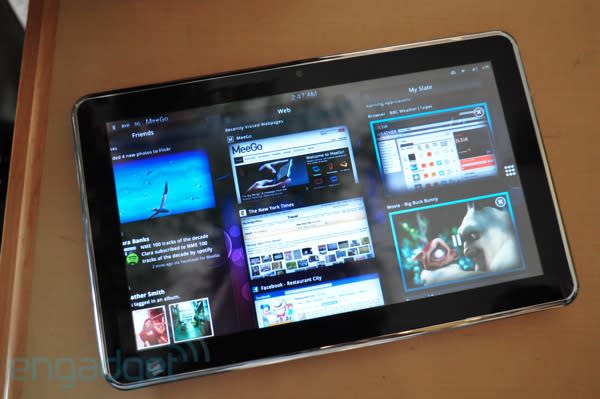 We saw a lot of new technology demoed at Intel's Computex keynote this afternoon, but the most impressive thing may have just been MeeGo running on a 10-inch Moorestown Quanta Redvale tablet. While the demo on stage was very brief, we caught up with some of the product managers right after the presser and convinced them to give us a peek at what is coming in 2011. To say we're impressed with the "pre-alpha" version of the software is a huge understatement. So, what are you still doing up here? Hit the gallery for a ton of hands-on shots and then that read more button for some impressions and video. The tablet version of MeeGo is built on the same underlying software as the netbook version, but the interface is drastically different. There are two basic areas of the OS -- the simple and panel mode. The simple mode is a basic grid of applications, while the panel mode is a series of vertical panes that can be customized with pictures, social networking feeds, and web bookmarks. The latter was quite impressive as it will be entirely user customizable. We also caught that Intel's App Up store was preloaded, but we were told that there will be a separate SDK released this August for developing multitouch applications.

On the hardware front, the 1.5GHz Moorestown chip seemed to be super snappy and we witnessed it play a 720p clip smoothly. The actual 10-inch Quanta Redvale tablet was incredibly thin and light, but the viewing angles of the reference design's screen were poor to say the least. However, the resistive panel was very responsive to taps on the screen and pinching to zoom. Despite the pre-alpha label we have to say we were very impressed with what Intel is up to here -- it's all looking polished and very simple to navigate. The only bad news we have right now is that we have to wait until early 2011 to see it on some actual devices.

In this article: breaking news, BreakingNews, computex, computex 2010, Computex2010, exclusive, impressions, Intel, intel moorestown, IntelMoorestown, meego, Meego tablet, Meego Tablet OS, MeegoTablet, MeegoTabletOs, moorestown, preview, quanta, Quanta Redvale, QuantaRedvale, redvale, software, tablet, tablets, video
All products recommended by Engadget are selected by our editorial team, independent of our parent company. Some of our stories include affiliate links. If you buy something through one of these links, we may earn an affiliate commission.
Share
Tweet
Share