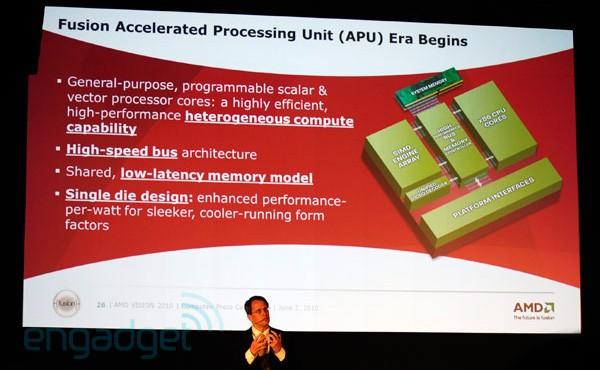 Hey, what do you know -- the Fusion lives! AMD's CPU / GPU hybrid, which sounded so revolutionary back when it was first thought up, has finally shown off its Accelerated Processing grunt by chewing through a section of Aliens vs Predator live on stage at Computex. We can't say we were exactly bowled over by the performance -- the demo was just a leisurely walk through some leafy terrain, yet still seemed to dip below 30 frames a second at a few points, showing that the APU wasn't all that comfortable handling the DirectX 11 tasks that were put upon it. This chip is targeted at ultraportables, however, and that's a crowd with distinctly lower standards than your usual desktop gamer, so maybe there's a future for this 2011-bound slice of silicon after all. We've got video of the full AMD presentation after the break -- you'll want to skip ahead 59 minutes to see the AVP runthrough.

Rick Bergman, senior vice president and general manager, AMD Products Group, provided an APU technology demonstration during a press conference today. This demonstration provided a sneak peek into the upcoming seismic shift in the computing industry: power-efficient processors that combine CPU, GPU, video processing and other accelerator capabilities in a single-die design to efficiently power the most popular and demanding consumer experiences, from HD video applications to media-rich Internet experiences to DirectX® 11 games. The AMD Fusion Family of APUs represent a distinctly powerful processing approach to the evolving digital consumer landscape, where more than 28 billion videos are watched each month online and a thousand pictures are uploaded to social networking sites every second.

"Hundreds of millions of us now create, interact with, and share intensely visual digital content," said Rick Bergman, senior vice president and general manager, AMD Product Group. "This explosion in multimedia requires new applications and new ways to manage and manipulate data. Low resolution video needs to be up-scaled for larger screens, HD video must be shrunk for smart phones, and home movies need to be stabilized and cleaned up for more enjoyable viewing. When AMD formally launches the AMD Fusion family of APUs, scheduled for the first half of in 2011, we expect the PC experience to evolve dramatically."

Consumers are hungry for applications that run faster and make digital media easier to enjoy, and a new wave of software innovation is taking place as AMD software partners take advantage of AMD APUs and GPUs to enable better experiences across an ever-widening set of content. Microsoft joined AMD on stage at Computex and discussed how AMD Fusion APUs can enable improvements to applications such as Microsoft® Windows® 7 and DirectX® 11, and how CPU and GPU collaborative computing can enable superior PC experiences.

At Computex 2010, AMD also unveiled the "AMD Fusion Fund," a vehicle to make strategic investments in companies developing innovative solutions that will take advantage of the forthcoming AMD Fusion family of APUs. Additional details were disclosed on the AMD Fusion Fund in a separate announcement.
Extending Consumer and Graphics Leadership at Computex

With the launch of the AMD Fusion Family of APUs planned for the first half of 2011, AMD is positioned to extend the leadership it already has in the consumer PC market with VISION Technology from AMD and in the graphics market with the award winning ATI Radeon™ family of GPUs. At Computex, both product lines were on display for attendees, including many of the brand new VISION-powered SKUs recently launched by OEMs. In May, AMD announced a significant platform refresh for its VISION Technology, with as many as 135 new ultrathin and mainstream notebooks arriving on the market.

In this article: aliens vs predator, AliensVsPredator, amd fusion, AmdFusion, apu, computex, computex 2010, Computex2010, demo, demonstration, directx 11, Directx11, fusion, fusion apu, FusionApu, launch, video
All products recommended by Engadget are selected by our editorial team, independent of our parent company. Some of our stories include affiliate links. If you buy something through one of these links, we may earn an affiliate commission.
Share
Tweet
Share