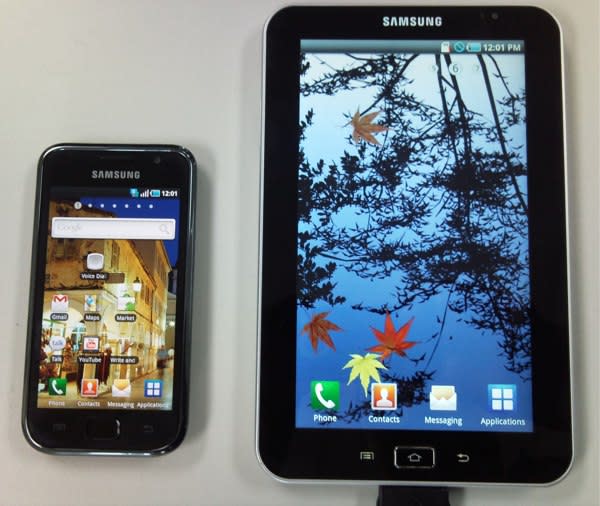 If only there were more tablets in the world, you know? Samsung has heard the call, and truth be told they might have a nice crack at creating something desirable. The 7-inch Galaxy Tab (previously referred to as the S-Pad), runs Android with Samsung's TouchWiz UI on top (similar to the Galaxy S sitting next to it). According to the Tweets by Samsung Blog South Africa -- an odd place indeed to make this sort of unveiling -- it has a "high resolution" screen, and it's supposed to be AMOLED if an earlier leak on the "S-Pad" is to be believed. That S-Pad info also mentioned a Samsung Apps store, which would make sense because as far as we know Google isn't letting "official" Android Market-equipped, Google-blessed tablets out of the gate just yet.

[Thanks to everyone who sent this in]
In this article: breaking news, BreakingNews, galaxy, galaxy s tab, galaxy s-tab, galaxy tab, GalaxyS-tab, GalaxySTab, GalaxyTab, s-tab, samsung, stab, tab, tablet
All products recommended by Engadget are selected by our editorial team, independent of our parent company. Some of our stories include affiliate links. If you buy something through one of these links, we may earn an affiliate commission.
Share
Tweet
Share