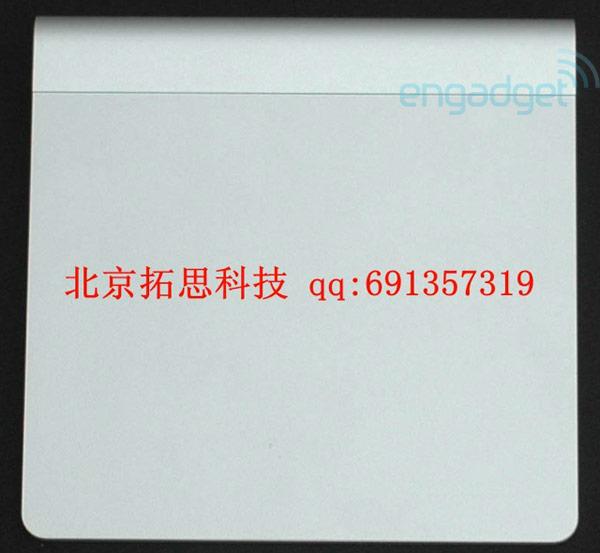 Of all the surprises we expected to hear about in the WWDC keynote, a multitouch trackpad peripheral didn't exactly pop into our brains. But -- whoomp -- here it is. What we appear to be looking at is a brand new input device that Apple has dreamed up which connects to desktops (and laptops, if you like) via Bluetooth, much like the Apple Keyboard. If you take what you see in the photos at face value, it would seem that the folks in Cupertino are making a play for finger-based input in a big way -- taking the work they've done on Mac laptops and the iPhone, iPod touch, and iPad, and translating it to the desktop realm. This weirdly lines up perfectly with rumors from earlier in the year, emanating from both John Gruber (of Daring Fireball fame), and MacRumors -- the former reporting that Apple was set to release a "Mentioned-Nowhere-Else-But-in-This-Very-Headline Multi-Touch Trackpad Gadget for Desktop Macs," and the latter taking notice of an Apple trademark application for the "Magic Trackpad." It certainly all makes sense given that the company has made not-so-subtle moves away from standard input devices to finger-friendly options in many, many of its recent products. Whatever the case may be, we're potentially just hours away from the truth, so feast your eyes on the photos, and get ready for the big reveal.

Update: New images received with a claim that the device supports handwriting recognition in addition to "every feature you can find on a Magic Mouse (and possibly features of a MacBook Pro trackpad)." This, from a person who claims to be personally testing it. Something we hope to do for ourselves before the day is through.

Update 2: Reader Dan Berte made a quick little cardboard mockup using his Apple keyboard and Magic Mouse for relative sizing and he's estimating the tracking area to be around six inches diagonal. Makes sense -- check his handiwork after the break.

In this article: apple, breaking news, BreakingNews, exclusive, magic touchpad, magic trackpad, MagicTouchpad, MagicTrackpad, touch pad, touchpad, track pad, trackpad, wwdc, wwdc 2010, Wwdc2010
All products recommended by Engadget are selected by our editorial team, independent of our parent company. Some of our stories include affiliate links. If you buy something through one of these links, we may earn an affiliate commission.
Share
Tweet
Share