iPads were everywhere at Musikmesse 2011 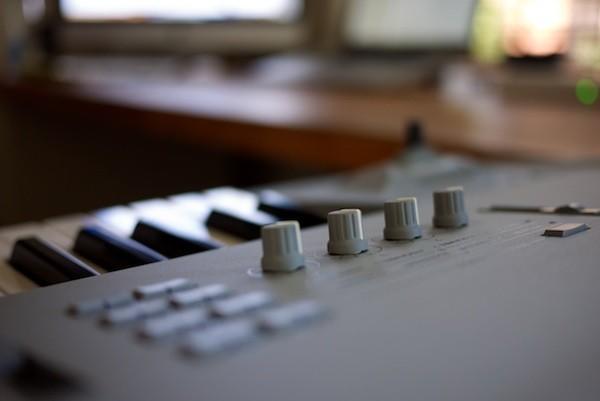 It was 1987 in a dark Orange County new wave recording studio when I first saw virtual notes scroll past my eyes on a nine-inch Mac Plus screen. The Yamaha DX-7 and Sequential Prophet 5 were lit up like a space ship, and I knew one thing for sure: I wanted to go to there. I wanted to do what Front 242, Blancmange and New Order were doing. I was hooked: high on aftertouch.

So began my wallet-killing, girl-repelling high school obsession and summer-break career. I worked in the keyboard department at Guitar Center, bought racks of gear at cost, and set my sights on becoming the next great electronic music sensation of the late 80s. Or... not.

So what was left behind? Several lame Skinny Puppy ripoffs, a few decent dance tracks that I still have hidden away on cassettes in my office closet (of course, I don't have a cassette deck on which to hear said tracks), and plenty of fond memories about some beautiful old electronic music gear. I present here for your perusal some of my more memorable axes.

Roland TR-505 Rhythm Composer
This was the first piece of MIDI gear my bandmate picked up. The 505 "Rhythm Composer" sounded exactly like the digital drums from New Order's "Blue Monday" and had an infectious hand clap sample that is still used today by artists like Ladytron. It was super easy to program by stringing together basic pattern loops and progressions. The 505 could even control external MIDI devices, which made it a serviceable sequencer in times of need.

Roland S-10 Sampler [Quick-disk (2.8-inch disks)]
In the mid-80s, industrial bands like Skinny Puppy, SPK, and Front 242 were dropping samples into their songs, using animal sounds as percussive hits or creating entire verses with sound bites from classic movies. I wanted a part of that action, but most samplers of the era like the Akai S1000 or EMU Emulator ran about $3000. That's why I loved the goofy Roland S-10, an entry-level sampler for poor nerds. The 49-key machine sported a paltry 256K RAM which translated to a total of 4.4-seconds of sampling time. The good news, though, was that the S-10 had four voices (4-part multi-timbral), so you could layer or split four samples as you saw fit - as long, of course, as they didn't add up to more than 4.4 cumulative seconds.

For storage, the S-10 used the ephemeral 2.8-inch "Quick-Disk" drive. This made the rare disks insanely expensive at first, but by the time I got my poor 16 year old hands on them, they were being sold in clearance bins along with drum sticks and incomplete guitar string sets. Luckily, Roland produced a decent library of disks, so I happily ended up with thousands of ready-to-go samples left behind by people moving on to real samplers.

Mac SE + Passport Designs Master Tracks Pro
When it was time to move on from the TR-505 in 1987, I scrounged up enough cash for a Mac SE with dual 800K 3.5-inch drives for just $2000. I later saved another $800 for a CMS 60MB external SCSI drive that looked like a stunted XT desktop. Combined with a Passport serial MIDI interface and Master Tracks Pro (which, I still believe to this day, had the most intuitive sequencer interface of all time), the SE became the centerpiece of my 80s creative dreams and the object of my parents' ire. (And yes, I know that's an Atari screenshot above.)

Kawai K1
Yes, there was once a day when crazy kids were choosing digital over analog. The K1 was a filthy-sounding 8-bit digital synthesizer that, at the time, was a breakthrough product. First, it housed 256 digital samples, of which four could be mixed and matched to create new sounds. Second, it was eight-part multi-timbral, which meant I could play eight completely different sounds at a time using Master Tracks - it was a band in a box! Third, it was a versatile MIDI controller with 61 full-size keys, pressure sensitivity, and aftertouch. Finally, it could be had for around $500 while the popular Korg M1 was going for three times as much. The K1 served as my main controller for years even after I grew tired of its noisy filter-free fidelity.

Yamaha TG55
You know those rare moments when you hear an instrument and immediately conjure up riffs, patterns, even complete songs? No? Either way, that's what happened in 1989 when I first heard Yamaha's SY-77 synth/sampler/sequencer/workstation. Yamaha called its newest sonic technology AWM2 (Advanced Wave Memory 2), which was similar to the 16-bit PCM sample playback that Roland and Korg were using at the time. Unlike the other digital synths, though, AWM2 added analog-like filters and multi-step envelopes that allowed one to create huge, sweeping pads that perfectly filled the gaps left behind by what many felt was becoming an increasingly terse digital sound.

Of course, I didn't need another controller or a sequencer, but the rack-mounted TG55 was released as a cheaper alternative. While it lacked the sampler and sequencer of the SY77, the price was right and the sound was still delicious. This quickly became my sound-source of choice well into my postmodern soundtrack years.

Alesis Quadraverb
By the time I was able to complete a few songs in Master Tracks, it became painfully clear that I'd need a decent effects processor if I ever hoped to record vocals and analog instruments with any adequacy. The Alesis Quadraverb was the obvious choice, as it could do everything from reverb and delay to ring modulation, chorus, flange, resonation, phasing, and even sweepable EQ. What's more, virtually every effect could be controlled and tweaked using MIDI in real time. For example, for a vocal track, I could tell the Quadraverb to use reverb on the verse, switch to a multi-tap delay during the chorus, and then flip on some flange for a trippy bridge. This made recording takes and re-takes (of which there were plenty as I'm a pretty questionable vocalist) a breeze.

Mixer
I went through a massive sortie of mixers including a late-70s garange band-style Tangent wood console mixer, a Radio Shack DJ mixer, and a rack-mounted Fostex 2016 line mixer. The latter stayed in my studio the longest, and it was perfect for mixing keyboards and instruments in a quiet, simple manner. It took up only a couple rack spaces, had two auxillary outs for recording gear and monitoring, and was just simple enough to be transparent in recording sessions. Most importantly, it could handle 16 channels of inputs right on the unit's front plate for quick plug-and-play sessions. The biggest drawback was that it didn't include XLR mic inputs or fantom power for condenser microphones.

These days
I still write music, but modern MIDI and synth technology have made things a heck of a lot simpler and less gear-pornographic. Most synthesis, recording, and mixing can all be done by any modern computer, and my 27-inch iMac is more than capable of reproducing all this gear and more. I still like to use an actual synth, though, and a Korg Triton serves my needs quite well. Its old-school MOSS soundboard gives me some fun analog sounds and it's a superb MIDI controller with its ribbon touch strip and assignable knobs. Finally, a Tascam US-122L MIDI and audio interface gives me all the connections I need - including those XLR ins. I've moved on to Cubase, but am thinking of finally making the leap to Pro Tools or Logic as it seems those are the most state-of-the-art. I miss you, Master Tracks Pro.

So... gone are the crates of MIDI spaghetti, shoeboxes of sample disks, and chemical wafts of hot carpeted racks. I know some music nerds like to keep that stuff around and even seek it out like precious relics on auction sites, but I'll happily reminisce here with a lower utility bill and extra floor space, thank you very much.
In this article: alesis, alesis quadraverb, AlesisQuadraverb, k1, kawai, kawai k1, KawaiK1, korg triton, KorgTriton, lorg, mac plus, mac se, MacPlus, MacSe, master tracks, master tracks pro, MasterTracks, MasterTracksPro, midi, music, passport designs, PassportDesigns, quadraverb, rolan tr-505, Roland Emmerich, roland s-10, RolandEmmerich, RolandS-10, RolanTr-505, s-100, sequencer, tascam, tascam us-122l, TascamUs-122l, tg 55, Tg55, tr-505, triton, us-122l, yamaha tg55, YamahaTg55
All products recommended by Engadget are selected by our editorial team, independent of our parent company. Some of our stories include affiliate links. If you buy something through one of these links, we may earn an affiliate commission.
Share
Tweet
Share