The next Nokia remake is the XpressMusic-branded 5310

Nokia will announce its new phone in a James Bond trailer 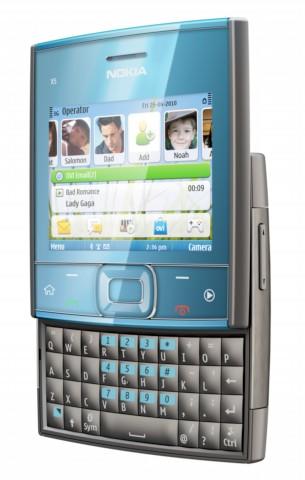 Well, hey, Nokia just officially launched the X5 in Singapore, apparently as a followup to the Twist and the latest chubby square slider to hit in the past few months after the Motorola Flipout and Kin One. No, we're not sure why this form factor is suddenly a Thing either. This guy is actually Nokia's second X5 --a China-only X5 with a totally different design was announced in April, so that's nice and confusing. We don't have an official spec sheet on this new X5 yet, but we're told it runs Symbian S60, and has a five megapixel camera, Facebook, MySpace and YouTube integration, as well as some sort of shake-based notification feature we don't really understand. It comes in black, hot pink, bright blue, and, um, unattractive yellow, and it's pretty thick, if the hands-on photos are to be believed. That's all we know for now -- hit the source links for a bunch more photos, and we'll let you know if we hear anything else.

In this article: nokia, qwerty, qwerty slider, QwertySlider, s60, slider, square, square slider, SquareSlider, symbian, symbian s60, SymbianS60, video, x-series, x5
All products recommended by Engadget are selected by our editorial team, independent of our parent company. Some of our stories include affiliate links. If you buy something through one of these links, we may earn an affiliate commission.
Share
Tweet
Share