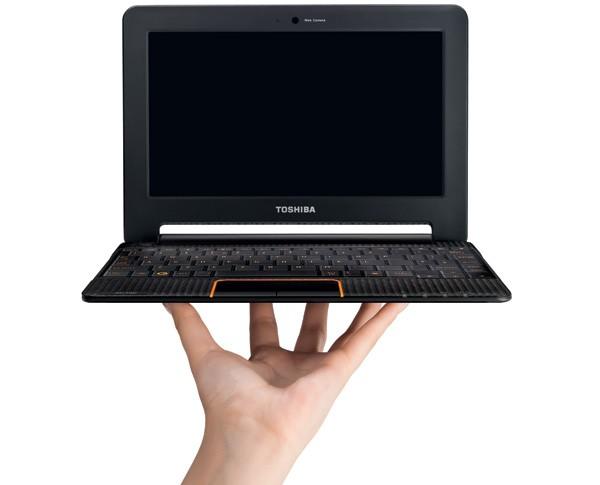 We wouldn't fault you for thinking that's a first generation ASUS Eee PC what with that iconic fingertip pose and all. But Toshiba's AC100 is a very modern take on the ol' Atom-based netbook idea. For starters, this super slim smartbook runs Android 2.1 on a 1GHz NVIDIA Tegra 250 SoC (built around a dual-core ARM Cortex-A9 MPCore processor) capable of about 8 hours of browsing and video playback (and 7 days standby) before needing a recharge. It's also packing a 32GB SSD, 512MB of DDR2 memory, 802.11n WiFi, optional 3G data, Bluetooth 2.1+EDR, a 1.3 megapixel webcam, and an HDMI jack beneath that 10.1-inch 1,024 x 600 pixel display. As for software, the AC100 ships with Documents to Go for editing MS Office docs, an email client with POP3, IMAP, and Exchange support, an Opera Mobile browser, and a Tosh media player which should support HD 1080p video playback if it's taking full advantage of that Tegra 2 silicon. Too bad Toshiba is being quiet about the pricing and availability 'cause this little guy has us intrigued.

Update: Netbooked got its hands on with the Japanese Dynabook AZ twin and received confirmation that it'll ship in Japan in August for between ¥40,000 and ¥50,000 (about $438 to $548). Video after the break. 06.20.2010 – Neuss, Germany – Toshiba Europe GmbH today entered the mobile internet device market by introducing the Toshiba AC100, which is designed with a clamshell form factor. Its slimness and light weight coupled with its always-on capability makes it the ideal device to consume media, browse the Internet and view and edit documents, emails and other messages while out and about. The AC100 can remain in standby mode for up to seven days. The highly personalisable 25.7cm (10.1'') AC100 will be available during the third quarter of 2010 throughout Europe, Middle East and Africa.

The best of two worlds
"Our smart companion, the AC100, is a member of the mobile internet device segment that combines the best of two product categories: like a smartphone, it is always on, whilst offering the convenience of a clamshell netbook with a bigger screen and a full size keyboard," says Thomas Teckentrup, General Manager, Product, Strategy and Development Division, Computer Systems Group EMEA. It is targeted at users who utilise several devices but still desire an easy-to use, slim and light smart companion that can be taken almost everywhere and that offers superior usability to that of smartphones.

No need to recharge every day
The AndroidTM[1] based system takes less than a second to switch the AC100 from standby to full activity mode whilst supporting a smartphone-like 'always-on' capability. The Toshiba AC100 can go for up to seven days without having to be recharged. When being used intensively, it can provide at least eight hours of mixed browsing and video playback on one charge.

Simple-to-use and easy-to-personalise
The black and orange coloured AC100 is intuitively usable and offers the possibility to personalise the device by downloading applications and widgets. The AC100 ships with a number of applications pre-installed, amongst them Documents To Go®, for viewing and editing Microsoft Office files, an E-mail Client with POP3, IMAP and Exchange support, a messaging client, Opera Mobile for browsing the web as well as Toshiba Media Player for playing and viewing video, music and pictures.

Users can also deploy up to five home screens on their Toshiba AC100, which can be configured to change automatically depending on their location as indicated by the SSID[2]. For example, an owner could set short-cuts to work-related applications, widgets and 'live-files' to appear on the home screen when they are in their office, personal applications and widgets when they are at home and entertainment-orientated applications and widgets everywhere else.

* depending on configuration and local availability
In this article: 1ghz, 250, a9, ac100, android, android 2.1, Android2.1, arm, az, core a9 mpcore, CoreA9Mpcore, cortex a9, cortex-a9, cortex-a9 mpcore, Cortex-a9Mpcore, CortexA9, documents to go, DocumentsToGo, dynabook, dynabook az, DynabookAz, google, mpcore, netbook, nvidia, opera mobile, OperaMobile, smartbook, tegra, tegra 250, Tegra250, toshiba, video
All products recommended by Engadget are selected by our editorial team, independent of our parent company. Some of our stories include affiliate links. If you buy something through one of these links, we may earn an affiliate commission.
Share
Tweet
Share