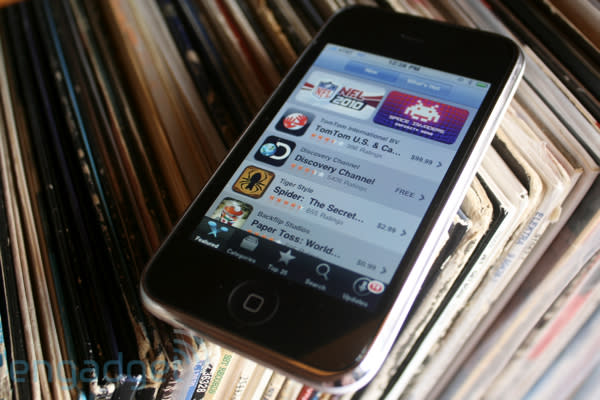 A little over two years ago, Apple changed the face of mobile computing when it launched the App Store and broke down the barriers between app developers and end users. There was no longer a need for users to go to a third-party web site, hand over a credit card, download an app to their computer, and sync it to their device. The App Store's integration with iTunes made it easy for the consumer to purchase apps, and purchase apps they did. But while Apple now commands a major lead in the sheer number of apps for the iOS platform, it's far from game over in the mobile market, and other competitors can catch up. But it's going to take more than just an app store for other platforms to level the playing field -- that's just the table stakes now. Here's what mobile platform providers need to compete effectively.

First, the devices must stand on their own. Before Apple introduced the iPhone OS SDK, the developer program and the App Store, the company sold more than a million iPhones and iPod touches. That is, it had captured a large enough market for developers to notice before third-party apps were brought into the equation. Handset vendors and platform providers must have devices that are compelling to consumers out of the box, with features and form factors that attract buyers independently. Seeding a market with quality devices is one way to capture the attention of developers who will all want to be part of a platform with room to grow.

Second, developers want leverage -- they want the maximum possible utility from their hard work. In the case of iOS, that means apps can run on the iPhone, iPod touch and iPad. In the case of Windows Phone 7, the combination of Silverlight and XNA can enable apps to run across the phone, Xbox and PC platforms. Google has talked about Android running on everything from phones to tablets to TVs, all sharing a common Android app marketplace. Mobile will be increasingly become only a single aspect of the consumer's digital ecosystem, and platform providers must show developers the roadmap for connected screens beyond phones to get their attention.


Finally, show developers the money. It's an app monetization game, and devs want to make money. To do that, platform providers must create alternate business models for developers to tap into -- developers who feel they can monetize apps will create more apps, and more apps lead to more platform adoption, which ultimately leads to more devices sold. Both Google and Apple are betting heavily on ad platforms to help developers make money, but alternative monetization models, co-marketing efforts and discoverability resources are all critical to jump starting app platform development.

There's a battle going on for mobile platform supremacy, and right now there are simply too many platforms to succeed long term. And the old rules simply don't apply any more, as the criteria for mobile platform success in mobile reaches beyond simply having a well-stocked app store. It will take much more than an app store to drive success -- the key factor between success and irrelevance will increasingly be the cohesive application story each platform provider can tell. Look for the platforms with the out of-the-box and core experiences that also allow developers to best leverage and monetize their apps to make the cut long term. The wise vendors will figure this out sooner, while the others will begin a long slide into irrelevance.

Michael Gartenberg is a partner at Altimeter Group. His weblog can be found at gartenblog.net. Contact him at gartenberg AT gmail DOT com. Views expressed here are his own.
In this article: app store, app stores, apple, applications, apps, AppStore, AppStores, column, entelligence, google, microsoft, mobile apps, MobileApps
All products recommended by Engadget are selected by our editorial team, independent of our parent company. Some of our stories include affiliate links. If you buy something through one of these links, we may earn an affiliate commission.
Share
Tweet
Share